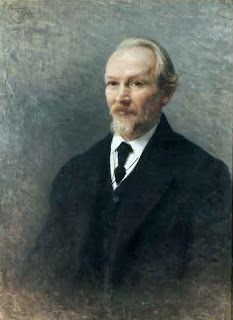 Vasily Rozanov was a controversial Russian writer and philosopher of the pre-Revolutionary period who tried to reconcile a revised form of Christianity with his own phallic eroticism. It's perhaps not surprising, therefore, that he should attract the interest of D. H. Lawrence, even if the latter is ambiguous about the sometimes astonishing writings of the former.

Thus, in his review of Solitaria, for example, whilst he concedes there are some "occasionally profound and striking" ideas, Lawrence can't help dismissing Rozanov as yet another morbidly introspective Russian who, like Dostoevsky, wallows in adoration of Jesus on the one hand, whilst remaining absorbedly concerned with his own dirty linen on the other:

"The contradictions in them are not so very mysterious, or edifying after all. They have a spurting, gamin hatred of civilisation, of Europe, of Christianity, of governments, and of everthing else, in their moments of energy; and in their inevitable relapses into weakness, they make the inevitable recantation, they whine, they humiliate themselves [...] and call it Christlike, and then with the left hand commit some dirty little crime or meannness, and call it the mysterious complexity of the human soul." [315]

Such half-baked nihilism is masturbatory and quickly becomes tiresome. As does Rozanov's fragmentary writing style, of which I remain a passionate exponent, regardless of Lawrence's criticism. That his work appears formless and seems to lack system, isn't a problem for me; nor is the often paradoxical character of the text. And the fact that Lawrence describes Rozanov as a "Mary Mary quite contrary" only makes me smile.

Whilst Lawrence finds Solitaria boring (despite the fact that Rozanov occasionally "hits the nail on the head and makes it jump") and Fallen Leaves sad and self-conscious (despite its sincerity), there is a work - having read a short extract - about which he's far more positive: Apocalypse of Our Times ...

"The Apocalypse must be a far more imporant book than Solitaria, and we wish to heaven we had been given it instead. Now at last we see Rozanov as a real thinker [...]"

"The book is an attack on Christianity, and as far as we are given to see, there is no canting or recanting in it. It is passionate, and suddenly valid. It is not jibing or criticism or pulling to pieces. It is a real passion. Rozanov has more or less recovered the genuine pagan vision, the phallic vision, and with these eyes he looks, in amazement and consternation, on the mess of Christianity.
For the first time, we get what we have got from no Russian, neither Tolstoy nor Dostoevsky nor any of them, a real, positive view on life. It is as if the pagan Russian had wakened up in Rozanov [...] and was just staggering at what he saw. His background is [...] the vast old pagan background, the phallic. And in front of this, the tortured complexity of Christian civilisation [...] is a kind of phantasmagoria to him.
He is the first Russian, as far as I am concerned, who has ever said anything to me. And his vision is full of passion, vivid, valid. He is the first to see that immortality is in the vividness of life, not in the loss of life. The butterfly becomes a whole revelation to him: and to us." [317]

How much of this is true and how much it's Lawrence projecting his own vision of phallic wholeness onto Rozanov, I don't know. But I do like the idea of a butterfly providing a revelation to us. Ultimately, I would suggest that we have more to learn by studying insects than in listening to the words of dead prophets.

For those who are interested in reading more on Lawrence and Rozanov, see the following essays: