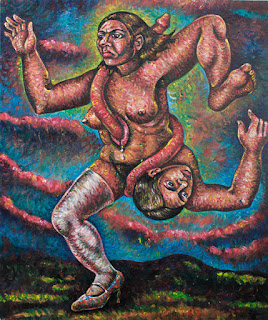 We have already discussed how Elsie is a prick tease in pearl earrings; and how her illicit lover and dance partner, Sam Adams, is a stocking fetishist who likes to make love to music, happy to humiliate the husbands and boyfriends of the young girls he preys upon.

And this is why he behaved as he did at the Christmas party two years earlier, when Adams publicly ravished his fiancée upon the dance floor and then pocketed one of her stockings that she had mistakenly carried with her instead of a handkerchief and then accidentally dropped in front of him. Whiston was angry that she let Adams not only pick up the item in question, but keep it too. However, although he would occasionally speak of the matter afterwards, it was one that he tellingly allowed to go unresolved.

When Whiston gets home from work on Valentine's evening, he's tired and depressed, but ready to engage in a little sadomasochistic sex play with Elsie, who, it seems, is an eager and consensual participant in such. Lawrence writes:

"All day the male in him had been uneasy, and this had fatigued him. She was curiously against him, inclined, as she sometimes was nowadays, to make mock of him and jeer at him and cut him off. He did not understand this, and it angered him deeply. She was uneasy before him.
She knew he was in a state of suppressed irritation. The veins stood out on the backs of his hands, his brow was drawn stiffly. Yet she could not help goading him."


Almost immediately, he asks her about the white stocking, with vicious resentment in his voice. This is the fetish object that excites and unites him, her, and Adams in a perverse relationship. She leaves the room and when she returns she is wearing the white stockings - most likely stained with Sam Adams's semen - and starts to parade around in front of him, admiring her own pretty legs and lifting up her skirt so that he might better see them and get a flash also of her frilly knickers.

Whiston tells her to stop making a spectacle of herself. But Elsie continues to dance round the room, kicking up her legs and singing as she did so, seemingly indifferent to how this might make him feel. They are, of course, deliberately inciting violent feelings of sexual jealousy and humiliation, as they delve into dark corners of the pornographic imagination. He calls her a whore and tells her to stop acting so shamelessly and yet he clearly delights in her behaviour, just as his abuse excites her:

"She was rousing all his uncontrollable anger. He sat glowering. Every one of her sentences stirred him up like a red-hot iron. Soon it would be too much." But still she doesn't stop - not until he suddenly - though inevitably - explodes into violence:


"He seemed to thrust his face and his eyes forward at her, as he rose slowly and came to her. She watched transfixed in terror. Her throat made a small sound, as she tried to scream.
Then, quick as lightning, the back of his hand struck her with a crash across the mouth, and she was flung back blinded against the wall. The shock shook a queer sound out of her. And then she saw him still coming on, his eyes holding her, his fist drawn back, advancing slowly. At any instant the blow might crash into her.
Mad with terror, she raised her hands with a queer clawing movement to cover her eyes and her temples, opening her mouth in a dumb shriek. There was no sound. But the sight of her slowly arrested him. He hung before her, looking at her fixedly, as she stood crouched against the wall with open, bleeding mouth, and wide-staring eyes, and two hands clawing over her temples. And his lust to see her bleed, to break her and destroy her, rose from an old source against her. It carried him. He wanted satisfaction."

"He had seen her standing there, a piteous, horrified thing, and he turned his face aside in shame and nausea. He went and sat heavily in his chair, and a curious ease, almost like sleep, came over his brain.
She walked away from the wall towards the fire, dizzy, white to the lips, mechanically wiping her small, bleeding mouth. He sat motionless. Then, gradually, her breath began to hiss, she shook, and was sobbing silently, in grief for herself. Without looking, he saw. It made his mad desire to destroy her come back.
She felt that now nothing would prevent him if he rose to kill her. She could not prevent him any more. She was yielded up to him. They both trembled in the balance, unconscious."

After a few moments, Elsie lifts her "tear-stained, swollen face" and looks at her husband with forlorn eyes that cause a "great flash of anguish" to pass over his body. He takes her in his arms and holds her with great tenderness, whilst telling her over and over that he loves her.

Why does Elsie stay with a man who is willing and able to abuse her in this manner? Is she frightened to leave, or is she only too aware of the practical and financial difficulties of leaving? Does she have a support network of friends and family that might enable her to do so?

By her own admission, Elsie is bored by her husband and used to his ways. Maybe she needs the physical stimulation that results from such activities and that violence and fear ultimately result in heightened pleasure or jouissance. Besides, as Sylvia would say, every woman adores a fascist - it just becomes a question of who's the Daddy; Ted Whiston or Sam Adams.

I suspect that Whiston could hardly even get it up without the thought of Elsie in the arms of Adams. Or, indeed, enjoying the attentions of a black-skinned lover who has bought her affections with a bar of chocolate (the ultimate erotico-racist fantasy of a man like Whiston).

The University of Adelaide have made The Prussian Officer and Other Stories (1914) freely available as an ebook: click here (or here if you want to go straight to 'The White Stocking').

For the first of the White Stocking case studies - on Elsie Whiston as a prick tease in pearl earrings - click here.

For the second of the White Stocking case studies - on Sam Adams as a Lothario who makes love to music - click here.

Posted by Stephen Alexander at 08:45 No comments: