All I Want for Christmas ... 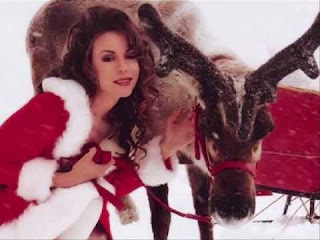 All I Want for Christmas Is You

Ever since a young child, I have, as a rule, instinctively felt myself in visceral opposition to that which has mass popular appeal, or solicits universal critical consensus. But there are, thankfully, always exceptions to any rule - even one's own.

And perhaps the loveliest of all exceptions is that slice of immaculate pop magic conjured up by the American singer-songwriter Mariah Carey during the festive season of 1994.

It's not my absolute favourite Xmas song: that would be Christmas Time (Don't Let the Bells End), by The Darkness (2003), for reasons indicated elsewhere on this blog [click here]. And, obviously, I'm also very fond of Slade's Merry Xmas Everybody (1973), showcasing the unique genius of Noddy Holder.

But Mariah's is the best and gives the purest sense of festive joy. She is, as one critic has pointed out, a great philosopher of the human heart:

"Since 1994, the song has sold more than 14 million copies and made a reported $50 million in royalties. And besides making her some sweet seasonal cash, Carey's masterpiece is an incredible feat of philosophical subterfuge. Christmas is a time of material and affection-based excess, yet the song is narrowly focused on just one thing: getting to be with a specific person, e.g., you. It rejects the idea of love in general in favor of love in particular, simultaneously defying and defining pop-music conventions. With infinitely more economy of expression and undoubtedly catchier lyrics, "All I Want for Christmas Is You" is a sort of Hegelian dialectic of Christmastime desire, taking the conflicting notions of abundance and specificity and packaging them neatly into an earworm for the generations."

Posted by Stephen Alexander at 14:33 No comments: