Selfies and the Rise of the Look Generation 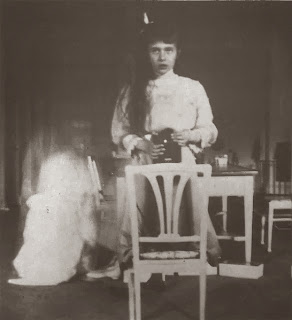 Typically taken with a smart phone or webcam and then posted onto a social media website, the selfie is very much a contemporary phenomenon.

This is not to say that it is entirely without precedent or lacking history. In fact, human beings have long enjoyed making and circulating photographic images of themselves and selfies have existed in non-digital form ever since the days of the Kodak Box Brownie. Thirteen year-old Anastasia Nikolaevna, for example, youngest daughter of Tsar Nicholas II of Russia, was one of the first girls to take her own picture, which she then mailed to a friend in 1914.

And so I have no wish to add my voice to those that suggest the selfie is evidence of either the empty narcissism of today's youth, or a sign that they have been pornified and suffer from low self-esteem. I understand the arguments put forward by concerned commentators, but fear that they often collapse into precisely the sort of moral hysteria that greets everything to do with technology, sex, and the play of images.

But what is worth pointing out is how Jean Baudrillard anticipated the rise of the selfie thirty years ago and nicely identified what is unique about this disenchanted form of mannerism, or pose without purpose.

In an interview with Le Nouvel Observateur, Baudrillard discussed what he termed the 'Look Generation' and argued that we were rapidly moving towards a world in which it would be impossible to speak of alienation or inauthenticity; a world in which individuals could no longer hope "to come into existence in and through the eye of the other, for there is no longer a dialectic of identity" [41].

In such a world, everyone is required to make themselves visible as an image, but without worrying too much about being (or even being seen). It's all about the utopia of the look, rather than the empire of the gaze. In proliferating and posting a huge number of self-taken images - including explicit images - Baudrillard doubts there is even any desire to seduce; "for this would require that appearances were carefully worked on, stylized, according to a strategy of diverting the other in order to harness their gaze and lead them into loss" [41].

The selfie is simply saying: I exist, I am here, I am an image, look at me, look, look! This may or may not be a form of narcissism, but what it certainly involves is "exhibition without inhibition, a kind of ingenious publicity in which each person becomes the impresario of their own appearance, of their own artifice" [41].

The Look Generation, concludes Baudrillard, have discovered a new and ironic form of passion; "that of being devoid of all illusion about their own subjectivity ... about their own desires ... fascinated by their own metamorphosis" [41] into electronic and ephemeral images lacking in any particular significance. Lovers of selfies no longer worry about the social logic of distinction (as found, for example, in fashion pictures taken by professional photographers) and they no longer believe in coded difference, such as gender. Rather, they simply play with it; just as they play with singularity "without falling into dandyism or snobbery" [42].