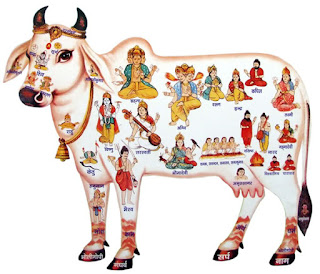 I've been ruminating recently on the bovine figure of the cow; the most common type of large domesticated ungulate - it's estimated that there are almost one-and-half billion of them - in the world today.

Most are raised as livestock for meat, farmed as dairy cattle, or slaughtered for their hides within a multibillion dollar global industry. And many are kept in truly appalling conditions, suffering constant cruelty and abuse before they eventually meet their violent end at the hands of men who often have zero concern for their welfare and even, it seems, regard these poor beasts with udder contempt.

And this is true even in countries such as India, where cows are venerated and their urine (gomutra) used for (crackpot) medical purposes. It may be a religious belief within Hinduism, for example, that life in all its forms is interconnected and that non-violence (ahimsa) towards all creatures is therefore an ethical obligation, but the fact is even the sacred cow is not fully protected and respect for cattle, whilst widespread, is far from universal.

Thus, whilst most Indian states have some form of regulation prohibiting the sale and slaughter of cows, these laws vary greatly from state to state and the country still produces and exports a lot of beef and a lot of leather. There are also numerous illegal abattoirs operating across the country. In addition, hundreds of thousands of (often stolen) cows are smuggled by criminal gangs across the border each year into Bangladesh, where they are then brutally dispatched and dismembered (not always in that order).

Europeans like to believe that their expensive leather goods are made in Italy and that the cows who supplied their skins were killed in a humane manner after leading relatively comfortable lives. But this is a mixture of bad faith and bullshit. For a lot of 'Italian leather' originates from the backstreets of Dhaka, where it's processed in makeshift tanneries in which workers, including children, are subject to atrocious conditions.

Unfortunately, that luxurious leather handbag that you're so proud of and paid so much for, is invariably the result of animal cruelty and human exploitation. And, if that weren't bad enough, the unregulated tanneries located not only in Bangladesh, but all over the developing world - from Brazil to Ethopia and Vietnam - produce eye-watering levels of pollution.

At this point, one feels like sighing with despair. But then one remembers Baudrillard's fabulous essay in which he suggests that Creutzfeldt-Jakob disease - the human variant of BSE or mad cow disease - is the suicidal revenge of a sacred animal whom, in our carnophallogocentric arrogance, we have transformed into a meat-milk-and-leather producing machine, and I start to smile again.

However, if it's true that all the gods reside in the body of Kamadhenu, the Mother of all Cows, as Hindu scripture suggests, then perhaps CJD is less an example of bovine terrorism and more a case of divine retribution: whom the gods wish to destroy, must first have their brains softened ...