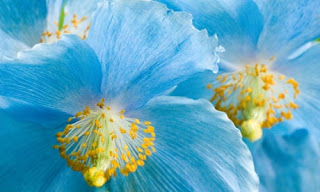 Even though some floraphiles like to parade their knowledge of its modern Latin name - derived from the Greek terms mēkōn and opsis - and insist that the Himalyan blue poppy is not a true poppy at all, it's always been one of my favourite flowers and there's surely no denying the beauty (and authenticity) of its colour.

In fact, I'm very fond of all blue flowers - from the palest of pale forget-me-nots and delicate little alpine plants that glory in the snow, to those large Bavarian gentians that Lawrence described as darkening the day with a smoky-blueness belonging to the underworld.

Simon says all this reveals the Romantic aspect of my character. And perhaps he's right: for the Romantics were certainly enchanted by die blaue Blumen and gave it crucial symbolic meaning within their aesthetics and wider philosophy.

Novalis, for example, the 18th-century German poet and mystic who preached a Liebesreligion based on his reading of Fichte, used the symbol of the blue flower in his unfinished novel entitled Heinrich von Ofterdingen based on the life of the fabled Middle High German poet of that name.

In the book, the blue flower betokens man's metaphysical striving for the infinite whilst also symbolising the importance of remaining true to the natural world, for, according to Novalis, the development of the human self - and the ideas and emotions experienced by that self - is also a form of miraculous flowering.

Having conceded my own Romanticism, it's important to note that, ultimately, I'm not a Romantic; that I am, in fact, anti-Romantisch. I wouldn't go so far as to shout: Schlagt die Germanistik tot, färbt die blaue Blume rot!, but I agree with Walter Benjamin that it's become impossible to share the intense longing for transcendence that marked the true Romantic, or remain an uncritical devotee of the blue flower (as a symbol, not as an actual blossom).

As Benjamin nicely noted: "No one really dreams any longer of the Blue Flower. Whoever awakes as Heinrich von Ofterdingen today must have overslept."

Friedrich von Hardenberg, (aka Novalis), Heinrich von Ofterdingen, unfinished work written in 1800 and first published a year after his death in 1802. An English translation of this work is available to read as a Project Gutenberg eBook by clicking here.