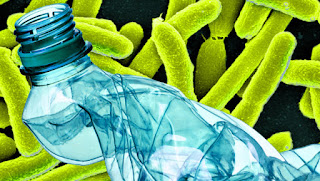 
In the above picture we can observe Ideonella sakainesis happily feasting on a plastic bottle;
breaking down polyethylene terephthalate into terephthalic acid and ethylene glycol -
two delicious and yet environmentally benign substances.


Another good news story from the world of science and serendipity ...

After the discovery in 2016 of a bacterium that had naturally evolved to eat plastic at a Japanese waste dump, researchers have now (accidentally) created a mutant enzyme that accelerates the break down of polymeric materials by around 20%.

The international team were initially attempting to determine the exact structure of the enzyme produced by the bug, which, like all enzymes, is basically a large protein molecule composed of a long chain of amino acids. For this they used an intense beam of X-rays that is 10 billion times brighter than the sun and capable of illuminating individual atoms that might otherwise withdraw into darkness.

It looked as if the structure of the enzyme was very similar to one evolved by many bacteria to digest cutin - a waxy, water-repellent substance used by plants for protection. By slightly tweaking it, however, they discovered that they had inadvertently made the enzyme even more efficient at breaking down PET (the plastic most commonly used to make soft drink bottles).

The new and improved enzyme takes only a few days to start the process of disintegrating the plastic; if left to degrade in the oceans, in comparison, it can take hundreds or even thousands of years. What's more, researchers are hopeful that this process might be significantly speeded up still further and thus play an important part in tackling the problem of what to do with the one million plastic bottles that are sold each minute around the globe.

One way they might possibly optimise the performance of the mutant enzyme is to transplant it into extremophile bacteria that enjoy living at temperatures over 70c. At such heat, PET changes from a hard to a viscous state, making it liable to degrade between 10 and 100 times faster.

It has to be said, this new research into enzyme technology is, to me at least, incredibly exciting and must hold out promise for the future. For not only are enzymes non-toxic and biodegradable, but they can be produced in large quantities by micro-organisms.

Having said that, it still remains crucial to reduce the amount of shit we produce and throw away in the first place. But this is surely a positive development - though not as astonishing as the fact that plastic-eating bugs evolved in the first place ...

Note: those interested in reading the published research for themselves should see Harry P. Austin et al, 'Characterization and engineering of a plastic-degrading aromatic polyesterase', Proceedings of the National Academy of Sciences (2018): click here.

Musical bonus: to listen to the X-Ray Spex track from 1978 that inspired the title to this post (and to see the band fronted by the inimitable Poly Styrene performing on Top of the Pops), click here.

Posted by Stephen Alexander at 18:02 No comments: