All of My Life is All I'll Give You: Un/Holy Reflections on the Case of St. Nietzsche (A Guest Post by Símón Solomon) 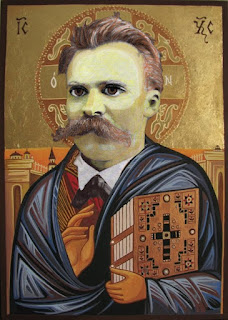 'How is negation of the will possible? How is the saint possible? This really seems to have been the question that started Schopenhauer off and made him into a philosopher.'

In concert with these Kantian-looking questions, Nietzsche conjoins his taskmaster in tragic aesthetics, so that, guilty by association, Schopenhauer's questions become Nietzsche's questions too. That they are also two questions he collapses into one yields, in effect, a pseudo-singularity that differs from itself. To insert ourselves between them, to read Nietzsche against himself by insisting on their analytical separability, we must therefore ask:

(i) What if sainthood were not only the personification of the will's renunciation?

(ii) What if martyrdom were something other, something stranger, than the instincts' resentful atrophy?

(iii) Might the saint even be that inculpable being, incorruptibly defenceless, who is innervated by a god?

'Up to now the most powerful people have still bowed reverently before the saint, as the riddle of self-conquest and of intentional final sacrifice. Why did they bow? In him they sensed - and, so to speak, behind the question mark of his fragile and lamentable appearance - the superior strength which wished to test itself in such a victory, the fortitude of the will, in which they knew how to recognise and honour their own fortitude and pleasure in mastery once more.'

In this exemplary aphorism, Nietzsche bears witness to the figure of the saint as a kind of limit-figure, in which the ascetic ideal - the nadir of the slavish revolt against which he stockpiles his anti-Christian dynamite - folds back upon itself into a mystical spectacle of the will to power. We might think here of Jung's crucial insight that les extrêmes se touchent; an observation that further demands Nietzsche be received as the ground-breaking psychologist he claimed himself to be, presenting as he is an early object lesson in the psychodynamics of projection. 'They were honouring something in themselves', he discerns, 'when they venerated the saint'.

Or, as Zarathustra declared, 'You want to create the world before which you can kneel: this is your ultimate hope and intoxication'.

Just as Rudolf Otto identified terror and fascination as the two drivers of religious awe, such overmastered reverence conceals, on Nietzsche’s diagnosis, a diabolical distrust: a hermeneutics of suspicion avant la lettre freudienne. What the men of power learned from this 'monster of denial' and unnatural contrarian was thus a new kind of dread, a new fear of power's self-overcoming.

In other words, they encountered in the saint a kind of fiend or force field, an unsurpassable adversary, atrociously empowered by 'a burning eye in a body half destroyed' [Human All Too Human, §141]. The will now bore a power that brought them, the non-saints, to a standstill. If the saint was a question mark, as Nietzsche tells us, whom they felt compelled to question, its crook sent back no echo.

In Tears and Saints, the Romanian philosopher E. M. Cioran offers the stirring speculation that 'Nietzsche’s greatest merit is that he knew how to defend himself from saintliness. What would have become of him had he let loose his natural impulses? He would have been a Pascal with all the saints’ madnesses.'

Of course, a wholly undefended Nietzsche would still have been Nietzsche, but for Cioran a Pascal-pacified Nietzsche, the Pascal Nietzsche envisioned as 'profound, wounded and monstrous' [Beyond Good And Evil, §45] and who antedated Wagner alongside Schopenhauer as one half of the four couples who did not refuse him, the sacrificer, in his 'descent into Hades' [Human All Too Human II, §408].

As to the demono-maniacal Nietzsche's infamous sign-off in Ecce Homo, 'Dionysus against the Crucified', was what defeated him what also broke his youthful Lieblingsdichter, the mad poet Hölderlin: the monotheistic cult of the Cross plunging into the imperishable circus of the Greeks that revolved around it eternally? The image of the Bacchic Jesus, the horned Christ, is a demonic thought, truly beyond good and evil.

Nietzsche may not have been a Christian, or, perhaps, was a kind of mortified Christian - 'a man whom the grace of God has not touched’ as Eric Voegelin described him - but nor was he simply a nostalgic pagan, a satyr of the wine-god: the god of ecstatic dissonance, of wine, women and tears.

As Rouven J. Steeves has noted, Nietzsche was not unambiguously 'against' Christianity, or laying siege to the Nazarene with the sorcery of Greek ecstasy. Rather, as something 'even more primordial', his agon channelled the free spirit of Luther via Pascal, mingled with his self-styled Dionysus as a creative principle of life, to become a kind of Jobian Prometheus - an anti-ass, a world-historical beast, a fire-breathing Anti-Christ.

'Dionysus against the Crucified' signals, we suggest, a kind of divine double-crossing, an impossible authorship: a Dionysus crucified; the dying Christ dionyised. The German gegen, however can also signify 'towards': Dionysus towards the Crucified. And toward the end, Nietzsche signed himself as the Crucified One ...

In the German language, weinen and wein, tears and wine, share a common root. Drinking and dying are given together for those who dare to speak with a forked tongue, before they are driven mad. Here is the close of Nietzsche’s pious and tormented 1863 schoolboy poem, 'Before the Crucifix'.


On the floor lay a coin,
corroded and minted
with the devil’s hand and blow,
what it costs eternally, in heaven and on earth,
the soul hanging on the cross,
and, sunk deep in sin and lust,
thinking itself holy
that must yet be damned.

R. J. Steeves, 'Dionysus versus the Crucified: Nietzsche and Voegelin and the Search for a Truthful Order', in Eric Voegelin and the Continental Tradition, ed. L. Trepanier and S. F. McGuire (University of Missouri, 2011), pp. 108-136.

Símón Solomon is a poet, translator, critic and tutor. He is a professional member of the Irish Writers Centre, Dublin and serves as a managing editor with the academic journal Psychoanalysis, Culture and Society. He blogs at (and can be contacted via) simonsolomon.ink

Símón appears here as part of the Torpedo the Ark Gastautoren Programm.

To read a sibling post by Stephen Alexander, on why it's preferable to have horns rather than a halo, click here.

Posted by Stephen Alexander at 19:17 No comments: