Gymnosophy 4: Oh Yes They Call it the Streak (Boogity, Boogity) 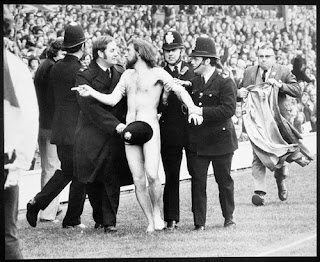 Released in the late-spring of 1974, The Streak was a smash hit single written and performed by the country western singer Ray Stevens, that comically cashed in on the then popular craze of streaking; i.e. the act of running naked through a public place - usually as a prank, although sometimes as an act of protest - and often chased by officials or policemen lending it Keystone Cops appeal.

The Streak sold over five million copies and topped the charts in both the US and UK. I didn't buy it, but I remember it with a certain fondness as one of the tunes of my childhood - probably due to the fact the record features a slide whistle - even if I found the phenomenon to which it referred somewhat disturbing.

II.  A Brief History of Streaking

Like most things, streaking isn't without a longer and more complex history than people imagine ...

One might, for example, discuss it in relation to the behaviour of the Neo-Adamites in medieval Europe, who passed naked through towns and villages; or, indeed, the 17th-century Quaker Solomon Eagle, mentioned by both Daniel Defoe and Samuel Pepys, who would run naked through the streets of London with a burning brazier upon his head (à la Arthur Brown), crying Repent! Repent!

Having said that, I'm not entirely convinced of the legitimacy of attempting to tie streaking in the modern sense to Christian asceticism; nor even to place it within the context of naturism. It's also distinct from flashing in the pervy sense, in that the intent is generally not to cause shock or outrage.* Ultimately, it makes more sense to see it as something that has its origins within American campus culture, with incidents of (male) college students running around naked beginning in the early 19th-century.

It wasn't until the 1960s and '70s, however, that streaking became a much wider cultural phenomenon; suddenly everyone wanted to get naked and exhibit themselves to the world and its cameras. Even supposedly uptight Brits were throwing caution - and their clothes - to the wind and you could hardly turn on the TV without having to see some idiot interrupt the rugby or cricket.

Whilst many streakers seem to have a penchant for running naked in front of cheering and/or jeering crowds at sporting events, perhaps the most widely seen streaker in history was Robert Opel who ran across the stage at the Oscars in 1974 - an event broadcast on live tv and so witnessed by millions of viewers around the world.

Bemused host David Niven quipped: 'Isn't it fascinating to think that probably the only laugh that man will ever get in his life is by stripping off and revealing his shortcomings.' Which is funny, but not quite the amusing ad-lib that people at the time took it to be; for there's evidence to suggest that the whole thing was a stunt that had been arranged by the show's producer and that Niven's line was scripted.

In Hollywood, even nudity is a game of artifice and spontaneity well rehearsed ...

* It should be noted, however, that unlike in the '70s, anybody now arrested for streaking in the United States risks being charged with indecent exposure and consequently branded a  sex offender upon conviction. Just one more example of the neo-puritanism that blights our times ...

Posted by Stephen Alexander at 10:44 No comments: