Reflections on the Death of a Jewel-Encrusted Tortoise 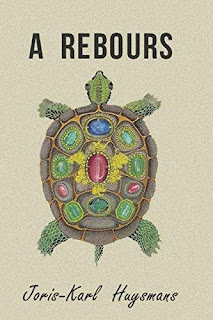 The decadent aristocrat Des Esseintes, whose retreat into an increasingly perverse and artificial inner life is depicted with such brilliance by J-K Huysmans in the 1884 novel À rebours (a title usually translated into English as either Against the Grain or Against Nature), is - as Patrick McGuinness points out - a fictional character, but he is not pure invention:

"Among the specific models for Des Esseintes was the eccentric King Ludwig II of Bavaria, who designed an artificial forest with mechanical animals, but there were also Baudelaire himself, Edmond de Goncourt and a variety of fictional characters [...] The most obvious model, however, was Count Robert de Montesquiou-Fezensac, an aesthete and eccentric who provided the model for Proust's Baron Charlus in A la recherche du temps perdu ..."

Not only were many of the decorative elements of Des Esseintes's home based on details of Montesquiou's own, but the implausible figure of a jewel-encrusted tortoise creeping about Huysmans's novel was, outrageously, based on fact: "Montesquiou had the poor creature customized to his tastes, and when it died wrote a poem in its memory ..."

This certainly makes one read chapter four of Against Nature with a renewed fascination - and a greater sympathy - for the slow-moving beast:

"The tortoise was the result of a fancy which had occurred to him shortly before leaving Paris. Looking one day at an Oriental carpet aglow with iridescent colours [...] he had thought what a good idea it would be to place on this carpet something that would move about and be dark enough to set off these gleaming tints."

Unfortunately, having purchased the tortoise and had it delivered to his home - and once it had been deposited on the carpet - it soon became apparent that "the negro-brown tint, the raw Sienna hue of the shell, dimmed the sheen of the carpet instead of bringing out its colours; the predominating gleams of silver had now lost nearly all their sparkle and matched the cold tones [...] along the edges of this hard, lustreless carapace".

Des Esseintes decides the only thing to do is to jazz the tortoise up a bit; to make it into a brilliant object (and artwork) in its own right; glazed in gold and encrusted with precious stones. But not just the familiar stones that vulgar people wear on their fingers; he wanted "startling and unusual gems " - both real and artificial - that, in combination, would "result in a fascinating and disconcerting harmony".

Job done - the tortoise suitably bejewelled - Des Esseintes felt perfectly happy and sat gazing at the splendid reptile as it lay "huddled in a corner of the dining room, glittering brightly in the half-light". Alas, his happiness doesn't last long as the tortoise dies: "Accustomed no doubt to a sedentary life, a modest existence spent in the shelter of its humble carapace, it had not been able to bear the dazzling luxury imposed upon it ..."

And people complain about the crushing effects of poverty!

Interestingly, there are faint echoes of this scene in Brideshead Revisited (1945), when Rex Mottram presents his fiancée Julia Flyte with a small tortoise that has her initials set in diamonds in the living shell. Unlike Des Esseintes, however, the narrator of Waugh's novel (Charles Ryder) can see that the bejewelled tortoise is slightly obscene and in poor taste.

In even poorer taste, however, is what children of my generation used to paint on the backs of pet tortoises; believing their shells to resemble the steel helmets of German soldiers, we would cheerfully decorate them with Iron Crosses and swastikas. And if there's anything more depressing than a dandified, decadent tortoise, it's a Nazified tortoise ...

For a related post to this one written in memory of J-K Huysmans (and his jewel-encrusted tortoise), click here.

Posted by Stephen Alexander at 18:05 2 comments: