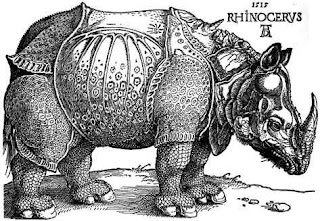 Even many non-philosophers know two stories concerning Wittgenstein's time at Cambridge: the first, an amusing confrontation with Karl Popper in October 1946 involving a poker, was the subject of a best-selling book by David Edmonds and John Eidinow; the second, an encounter between Bertrand Russell and his young Austrian student thirty-five years earlier, involving a discussion that centred on the question of whether or not there was a rhinoceros in the room ...

In brief, Russell wanted Wittgenstein to concede that we can have empirical knowledge of the world by admitting that there was, in fact, no rhino present. But the latter refused to do so - even after Russell amusingly began looking for the beast under the desk to no avail. Whilst Wittgenstein may have had a point, one can't help thinking he was, in this instance (as in others), being a bit of a dick.

Indeed, I'm not sure I understand the point he's trying to make or why he can't simply accept the factual non-presence of the rhino, given that in his early work he maintains that only such propositions can legitimately be asserted. But then, my understanding of Wittgenstein's thinking is limited (and probably inaccurate) due to its having been shaped primarily by drunken discussions in the Barley Mow pub many years ago.

At this very early stage in their relationship, Russell worried that Wittgenstein was a crank, rather than a philosophical genius. I can imagine how he felt, for I experience the same concern whenever I correspond with a friend of mine, let's call him Mr X, who also likes to deny - or at least contest - the propositions of natural science and refuse to accept that there is a mind-independent reality about which we can speak with confidence.

For Mr X, the world consists neither of facts nor of things, but only of interpretations and all descriptions are essentially metaphorical. He thus posits a daemonic ontology that is mytho-poetic rather than material-scientific in character. Rather than agree there was no rhino in the room, Mr X would sooner insist on its invisibility, or point out that imaginary objects are also real even if physically not present as actual entities; thus his (psycho) logical belief also in supernatural beings.

For Mr X, as for Wittgenstein (though for different reasons), Russell's seemingly commonsensical proposition is questionable on the grounds that it doesn't meaningfully assert anything about the world - certainly nothing upon which we can ever be completely certain - and is, therefore, what Wittgenstein terms in the Tractatus a 'nonsensical pseudo-proposition' [4.1272] (i.e. one that refers us only to the logic of language by which we talk about the world and not to things in themselves).

And so, perhaps Wittgenstein wasn't being a dick after all ... Perhaps, as J. F. Macdonald argues, it was Russell who profoundly misunderstood matters and who, by attempting to ridicule the younger man, was the one acting like a dick. Wittgenstein, says MacDonald, wasn't rejecting empirical propositions; rather, he was rejecting propositions that posed as such, but were not, and discreetly "making a point about what can be meaningfully said, not about what we don't know".

And perhaps I too should learn to listen more carefully to what it is Mr X is saying and not be so quick to dismiss it as absurd, or him as foolish ... For I fear this reveals merely my own philosophical arrogance and limitations.

Details of the conversation between Russell and Wittgenstein on the rhinoceros can be found in Russell's letters from the period to Lady Ottoline Morell (reprinted in Ray Monk's biography, Wittgenstein: The Duty of Genius, (Vintage, 1990), pp. 38-40), and in Russell's article in Mind Vol. 60, issue 239 (July 1951), pp. 297-98, which served as an obituary notice for Wittgenstein who died in April of that year.

Click here to read the above article online, noting how Russell misremembers the conversation concerning a hippo, not a rhino.

The essay by J. F. MacDonald from which I quote, 'Russell, Wittgenstein and the problem of the rhinoceros', is in the Southern Journal of Philosophy, vol. 31 (4), (1993), pp. 409-24, but can also be found in full online at the Rhino Resource Center (the world's largest rhino information website): click here.

The book by Edmonds and Eidinow that I mention at the beginning of the post - Wittgenstein's Poker: the story of a 10-minute argument between two great philosophers - was published by Faber in 2001.

Finally, readers interested in directly engaging with the early Wittgenstein should either get hold of a copy of Tractatus Logico-Philosophicus, trans. D. F. Pears and B. F. McGuinness, (Routledge and Kegan Paul, 1961), or click here to read the original 1922 edition as an ebook trans. C. K. Ogden, with an introduction by Bertrand Russell, courtesy of Project Gutenberg.

This post is for Mr X and Andy G.

Posted by Stephen Alexander at 17:42 No comments: