Psychrophilia: Or Love (and Death) in a Cold Climate 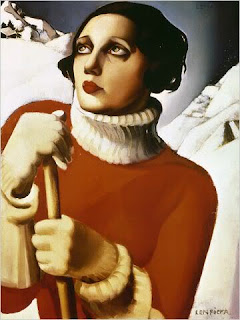 
The white races, having the arctic north behind them, the vast abstraction of ice and snow,
would fulfil a mystery of ice-destructive knowledge, snow-abstract annihilation.

Psychrophilia is another form of sexual fetishism encountered in the work of Mr. D. H. Lawrence - although often disguised beneath a pronounced fear and loathing of snow and ice - and I thought it might be interesting to examine his subzero-eroticism here, with reference to the doomed love affair between Gudrun and Gerald in Women in Love.

What amuses me is how Lawrence takes a relatively simple pleasure - in this case, one in which a person gains arousal via contact with cold objects or by exposing others to low temperatures - and incorporates it into his own perverse aesthetico-philosophical project.

The two couples - Ursula and Birkin and Gudrun and Gerald - decide to head off to the mountains for a winter holiday in the Alps. Unsuprisingly, there is snow everywhere: and whilst they all find the sheer whiteness and perfect silence of this alien world exhilarating at first, so too do they find it terrifying.

Only Gudrun feels truly at home surrounded by the "terrible waste of whiteness". It fills her, writes Lawrence, with a strange sense of rapture: "At last she had arrived, she had reached her place. Here at last she folded her venture and settled down like a crystal in the navel of snow, and was gone."

But Gerald also loves being high up amidst the snow-covered mountains: "A fierce, electric energy seemed to flow over all his limbs" and he felt himself superhumanly strong. When he fucks Gudrun for the first time in this frozen environment he feels his heart ignite like a flame of ice.

She, however, remains frigid in every sense of the term; dead to love and, ultimately, dead to life. For whilst she can see that the peaks of snow looked beautiful in the blue of evening - "glistening like transcendent, radiant spikes of blossom in the heavenly upper-world, so lovely and beyond" - she can't feel part of it: "She was divorced, debarred, a soul shut out."

Ursula and Birkin, meanwhile, aren't great fans of the snow and the frighteningly cold air. Underneath the glamour and the wonder of it all, Ursula detected something malevolent and murderous. And Birkin is forced to admit that he couldn't bear to be there were she not by his side, protecting him with her warmth from the snow-stillness and frozen eternality.

By the very next day, Ursula has had enough of it; "the dazzling whiteness seemed to beat upon her till it hurt her, she felt the cold was slowly strangling her soul. Her head felt dazed and numb." Suddenly, she decides she wants to go away - that she must escape from the world of snow and ice and return to the world of dark earth in which oranges and olives grew.*

And so Ursula and Birkin take their leave ...

As soon as Ursula and Birkin have left, the relationship between Gudrun and Gerald becomes increasingly frosty. His heart turns to ice at the sound of her voice; her flesh chills whenever he physically comes close. Even for psychrophiles, this is not a good sign. As Gudrun rightly concludes, their attempt to find love has been a total failure.

And so, here they are nowhere with nowhere left to go. Full of a cold passion of anger, Gerald imagines killing his mistress. And Gudrun is increasingly afraid that he'll do so. Only she doesn't intend to be killed: "A fine thread still united her to him. It should not be her death which broke it."

Although she has the life squeezed out of her, Gudrun isn't killed. At the last moment, Gerald, full of self-disgust, releases his grip and then drifts off, unconsciously, into the snow, where he lies down to sleep and to die (perchance to dream).

"When they brought the body home, the next morning, Gudrun was shut up in her room. [...] What should she say? What should she feel? What did they expect of her? She was coldly at a loss."

Ursula and Birkin return and the latter goes to view the corpse of his friend:

"He had loved him. And yet he felt chiefly disgust at the inert body lying there. It was so inert, so coldly dead, a carcase, Birkin's bowels seemed to turn to ice. He had to stand and look at the frozen dead body that had been Gerald. [...] He reached and touched the dead face. And the sharp, heavy bruise of ice bruised his living bowels. He wondered if he himself were freezing too, freezing from the inside."

Birkin also touches "the sharp, almost glittering fair hair of the frozen body" and as his heart begins to freeze so too does the blood in his veins turns to ice-water: "So cold, so cold, a heavy, bruising cold pressing on his arms from outside, and a heavier cold congealing within him, in his heart and in his bowels."

What can he do at last but turn away and cease to care. His friend was no more - just a strange icy lump lying there and Birkin doubtless came to the same conclusion that he had reached once before when considering the case of Gerald Crich:

"He was one of these strange white wonderful demons from the north, fulfilled in the destructive frost-mystery. And [...] fated to pass away in this knowledge, death by perfect cold [...] an omen of the universal dissolution into whiteness and snow."

Still, who knows, perhaps that's why the fires of hell are so necessary - to warm us up again, in death, so that we may be reborn. Perhaps all is not lost ...

* It's interesting to note that Loerke, like Ursula, is also a psychrophobe, rather than a psychrophile; his nightmare vision is of a world gone cold, where snow fell everywhere "and only white creatures, polar-bears, white foxes, and men like awful white snow-birds, persisted in ice cruelty". This is probably the only thing the two characters have in common.

D. H. Lawrence, Women in Love, ed. David Farmer, John Worthen and Lindeth Vasey, (Cambridge University Press, 1987). All lines quoted are from Chapters XXX-XXII, pp. 398-481, with the exception of the quotation prior to the opening remarks and the final quotation in section III, which are both taken from Chapter XIX, p. 254.

Posted by Stephen Alexander at 08:12 No comments: