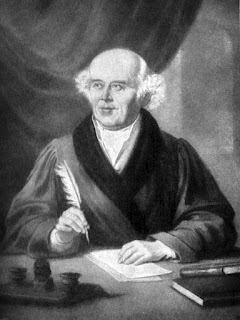 Samuel Hahnemann (1755-1843): founder of homeopathy
a practice based on the magical idea that like cures like
(similia similibus curentur)


One of the more amusing definitions of homeopathy and the often crackpot conditions it is thought to magically cure, is given by Rod Liddle: Homeopathy, he writes, is the practice of treating a non-existent ailment with a non-existent remedy.

This is a bit harsh inasmuch as some of the ailments are sometimes real enough, but it's spot on about homeopathy as a non-remedy (i.e., not even an honest sham cure, like snake oil); something - to again quote Liddle - of no fucking palliative use at all.

Prince Charles, Gandhi, and newly elected leader of the Labour Party, the sainted Jeremy Corbyn, may believe in the miraculous power of homeopathy and advocate its availability on the NHS - and they may have many supporters who share their faith in complementary medicines and natural alternatives to the drugs provided by the pharmaceutical industry on the back of years of scientific research and extensive clinical trials - but I would hope and trust that readers of this blog do not.

I wouldn't want to argue that belief in homeopathy is a moral failing, as the political journalist Ian Dunt insists - stupidity isn't a sin and irrationalism doesn't necessarily make you a bad person, even if it does often lead you to make bad choices and say foolish things - but I agree that this is a serious issue and that the rebellion against Western reason, of which it's a symptom, needs to be met face on.

Torpedo the ark means having done with judgement; but it certainly doesn't demand a sacrifice of intellect, or call for a leap into faith and superstition.

Posted by Stephen Alexander at 11:39 No comments: