Three Portraits of Naomi 2: Naomi in the Cat House

The three portraits of London-born supermodel Naomi Campbell that I wish to discuss were all taken by David LaChapelle for an issue of Playboy magazine (1 Dec 1999). As one might expect, all are visually stunning and typical in terms of composition and content of LaChapelle's aesthetico-erotic obsessions at this period. Unfortunately, these obsessions - such as his very obvious black girl fetish - rest upon rather questionable sexual and racial politics  ... 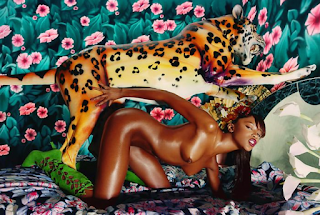 In this second portrait we find Naomi in the cat house ...

I don't know if LaChapelle supplied the title to the picture, but it wouldn't surprise me, for a 2006 book published by Taschen featuring his work was called Artists and Prostitutes, so his ideal of womanhood is clearly rooted in the porno-moral imagination and perpetuates a philosophy not so much of the bedroom, as of the brothel.

It's not, however, the stereotype of woman-as-whore that I wish to discuss here, as fascinating and as important as this is. Rather, I wish to comment on the idea of woman-as-animal; in particular, the white male obsession with portraying the sexuality of black women in bestial terms - as here, where Naomi is depicted naked and on all fours, like a wild jungle creature in need of taming (try to kiss her and she'll claw you to death).

Whether we are supposed to imagine Naomi being mounted by a leopard and interpret this photo as a zoosexual fantasy, or understand that she is herself some kind of cat-woman, marked with the curse of those who slink and mate and kill by night and whose femininity is distinctly feline in nature, I'm not sure. Either way, it's understandably troubling to women of colour who have to deal with the consequences of such dehumanising mythology - and I sympathise with those who object to being thought of in animalistic terms that have sexist and racist overtones.

For better or for worse, this film - and the equally disturbing 1942 movie of the same title upon which it was loosely based - forever fixed the fetishistic (and occult) idea in my mind that there are rare and exotic women in this world who turn into black panthers when sexually aroused; their melanism being a crucial component of their allure.

And so, whilst hopefully sensitive to the politics at play within representations of women - particularly women of African origin - that portray them in a primitive, fetishistic, hypersexual and inhuman manner (as wild animals in a state of perpetual heat and undress), I suspect I'm always going to be ravished by them.

Posted by Stephen Alexander at 08:05 No comments: