When Jayne Went to Ireland 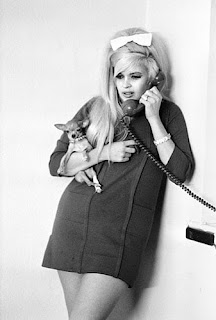 
Just a couple of months before achieving immortality on US Highway 90, the American movie star Jayne Mansfield paid a visit to the town of Tralee in South-West Ireland. It was a visit which, as we shall see, caused much consternation among the clergy who were determined to prevent Miss Mansfield from performing at the Mount Brandon Hotel, thereby safeguarding the moral welfare of the good people of County Kerry ...

Jayne had been gamely touring the UK on the clubs and pubs circuit and although she wasn't pulling in the crowds as hoped, she nevertheless continued to receive a nightly fee of £3000 - which was an extraordinary sum of money back in 1967. When the Mount Brandon Hotel offered her the chance of earning an extra £1000 for a half-hour set consisting of just six songs, Mansfield and her management team immediately agreed to the gig. News of the one-off show by the notorious blonde bombshell spread like wildfire and the 10/- tickets went like hotcakes. For if Jayne had become something of a joke figure in her homeland, in Ireland she was still a very big deal indeed.

Unfortunately, news of her impending visit also reached the ears of John Charles McQuaid; the profoundly conservative Archbishop of Dublin and Primate of All Ireland. He immediately determined that the show must not be allowed to go on and that Miss Mansfield should be made aware in no uncertain terms that she was not welcome in the Republic.

Looking back now - and through the eyes of a non-believer - it seems a ridiculous fuss over nothing. One can't help thinking of the classic early episode of Father Ted entitled 'The Passion of Saint Tibulus' (S1/E3). For in much the same way that Bishop Brennan charges Ted with protesting the screening of a supposedly blasphemous film at the Craggy Island cinema, Archbishop McQuaid instructed the 82-year-old Bishop of Kerry, Dennis Moynihan, to ensure that Miss Mansfield did not perform in Tralee.

Although feeling rather put on the spot, the aged priest nevertheless agreed to see what he could do and local churches immediately launched a public campaign calling on all God-fearing men and women of the region to boycott the show by a woman whom they described as a goddess of lust. Rumours, however, that priests marched up and down outside the venue with placards reading down with this sort of thing and careful now are, alas, untrue.

Whilst most people were indifferent to the whole affair, the campaign against Miss Mansfield attracted huge media attention and made headlines around the world. Subsequently, by the time she flew into Shannon Airport there were large crowds of fans, protesters and journalists waiting for her to step off the plane. As she did so, she waved and blew kisses to the crowd and informed everyone to a loud mix of cheers and boos, that the show would go on.

Unfortunately, however, the show had been booked for a Sunday night (April 23rd) and this afforded the Church the opportunity to attack Miss Mansfield straight after mass that very morning. Priests across Kerry warned their congregations to stay away and ensure the town of Tralee wasn't twinned with Babylon in the minds of the watching world. In an official statement, the show was described as a Satanic attack on decency: "If you worship Christ in the morning, you can't dance with the Devil in the evening."

Sadly, although Jayne was undeterred, the owners of the Mount Brandon Hotel lost their nerve. They initially informed her that the show would have to be cancelled because the support band had got lost en route from Dublin (in fact, the Kerry Blues were a local act who all lived in Tralee). Eventually, however, the owners of the hotel admitted that their cowardly decision to cancel at the last minute was due to clerical pressure and adverse publicity.

To her immense credit, Jayne simply smiled - as she always smiled - and when interviewed about what had happened refused to blame anyone, insisting that the people of Tralee were sweet and had been very kind to her. Six weeks later, she was dead and the Catholic Church had yet another act of vicious and shameful stupidity on its conscience to one day apologise for, having effectively cast stones at a beautiful woman contrary to the teachings of Jesus. 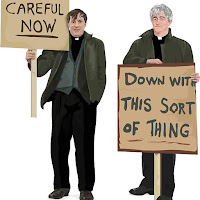 To watch a rare and fascinating news segment on Jayne Mansfield's controversial trip to Ireland in April 1967, click here. The footage includes an interview with the glamorous film star. Apologies for the loss of sound in some parts.

Anyone interested in watching the episode of Father Ted that I refer to, can find it in full on Vimeo: click here.

It's instructive - and amusing - to compare what happened to Jayne in Ireland with what happened to the Sex Pistols in Wales a decade later; the infamous Caerphilly gig (14 Dec 1976). Click here to view a half-hour documentary about this.

For other posts on Miss Mansfield, click here and here.