Unravelling the Mystery of the Sweater Girls 2: The Strange Case of Francine Gottfried 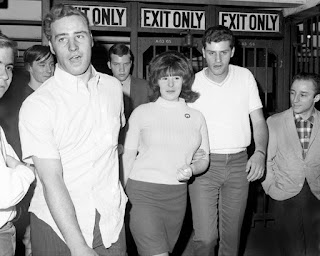 Francine Gottfried, a former clerical worker in New York City's financial district, isn't remembered by many people today. But, for a fortnight in September 1968, she was the talk of the town and dubbed by the press as Wall Street's Sweater Girl after increasing numbers of men began watching and following her as she walked to work, dressed in a manner that emphasised her curvaceous figure.

And when I say increasing numbers of men, I mean a lot of men; crowds of men forming spontaneously, like bees round a honey pot, in what we would today term flash mob fashion, all hoping for the chance to perversely gaze upon Francine's ample bosom.

Miss Gottfried had started work at a data processing centre of a large bank in May of '68. By late August, a small group of voyeurs had noticed her and the fact that she always passed them at the same time each day. Word soon spread amongst their friends and colleagues and the number of men who came to observe her grew exponentially larger. By mid-September, an estimated 2,000 men were waiting to catch a glimpse of the 21-year-old Jewish girl.

By this point, the crowd itself had become the phenomenon, drawing more and more people to it. On September 19, it was estimated that a crowd of over 5,000 financial district employees spent their lunchtime waiting for a 5' 3" brunette to exit the BMT station dressed in a tight yellow sweater and a miniskirt. Such was the chaos, that the police were obliged to close the streets and escort Francine to work. Trading on Wall Street was virtually suspended and the press reported that dignified brokers had seemingly lost their minds.

The following day, the crowd had doubled in size and over 10,000 spectators waited for Miss Gottfried. Unfortunately, their wait was in vain, as her boss had called her and requested she stay home until the mania passed. Publicists attempted to find a suitable replacement for Francine, including the stripper, Ronnie Bell, who worked at a local burlesque house. But the magic spell was broken and the fuss died down as quickly as it had arisen.

Sadly, Francine's hopes of landing a modelling contract and possible movie career came to nothing and she faded back into obscurity; though not before she got to have dinner with the Apollo 10 astronauts and Esquire magazine presented her with a Dubious Achievement award. Accounts of the crowd-gathering phenomenon she triggered also appeared in a number of sociological studies.

What this tells us about sexual politics - and male sexual behaviour in particular - I'll leave for readers to decide. Instead, I'll close, if I may, with a line from Bob Hope, who, when asked to comment on the mysterious appeal of the Sweater Girl, replied: "I don't know, but that's one mystery I'd sure like to unravel."

Posted by Stephen Alexander at 13:24 No comments:

Unravelling the Mystery of the Sweater Girls 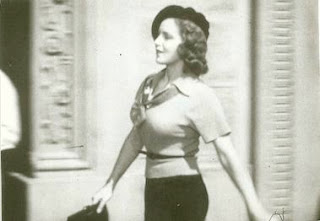 When fondly recalling those busty beauties of the 1940s and 50s, in their tight cashmere sweaters worn over highly structured, conically shaped bullet-bras designed to lift and separate, we often think of movie stars such as Jayne Mansfield, Jane Russell, and - of course - Lana Turner (described by one critic as the most glamorous woman in the history of cinema).

But the Sweater Girl was by no means merely a figment of the Hollywood imagination.

In fact, the above actresses were merely adopting what was already a popular look amongst bobby-soxers who desired maximum projection; a youthful fashion trend viewed with alarm by those who saw aggressively pointed breasts as a sure sign of moral decline. As a concerned police chief famously asked: What kind of wives and mothers would these girls become?

Of course, no one thought to ask at the time what kind of husbands and fathers breast fetishizing men might make; they were allowed and encouraged to indulge their culturally sanctioned mazophilia and carry on ogling young women in the streets, in the pages of pin-up magazines, and on screen.


Click here to go to part two of this post on the strange case of Francine Gottfried.

Posted by Stephen Alexander at 13:22 No comments: