Believe in the Ruins: Reflections of a Gargoyle on the Great Fire of Notre-Dame de Paris 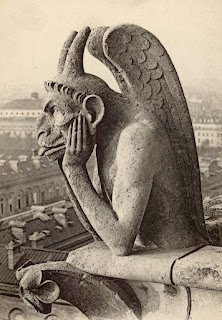 It's a shame that the fire at Notre-Dame only destroyed the roof and spire, leaving the towers and most of the building still standing. It would have been better for the people of France - better for all of us - if the whole thing had been razed to the ground.

I say this not as some kind of cultural barbarian or iconoclast, nor simply to be provocative; but, rather, as someone in agreement with D. H. Lawrence, who writes in one of his Etruscan sketches:

"We have reached the stage where we are weary of huge stone erections, and we begin to realise that it is  better to keep life fluid and changing, than try to hold it fast down in heavy monuments. Burdens on the face of the earth, are man's ponderous erections."

Like Lawrence, I love to see small wooden temples, that are unimposing and evanescent as flowers. Buildings - particularly religious buildings - should aim to be modest and charming rather than grand and impressive, preserving the natural humour of life: "And that is a task surely more worthy, and even much more difficult in the long run, than conquering the world or sacrificing the self or saving the immortal soul."

Even Notre-Dame, if we're honest, standing in Paris for centuries on end, had become a colossal dead weight - stuffed full of priceless treasures and cultural artefacts, but dead treasures and dead artefacts, belonging to another time, another people.

And one suspects that those who claim to revere the past and seek to preserve it - along with those billionaires and politicians who are now pledging obscene sums of cash to rebuild the cathedral (whilst continuing to ignore the deprivation in many parts of the city and its suburbs) - do so simply because they are unable ultimately to face up to the challenge of modernity to make it new.

Lawrence, of course, was ambiguous (at best) on the question of cathedrals - from Lincoln to Milan - long before his trip to see the Etruscan tombs in 1927.

In The Rainbow, for example, his novel of 1915, Lawrence stages an amusing conflict between Anna Brangwen and her husband Will, in which she destroys his passion for Lincoln Cathedral with her own gargoyle philosophy ...

Will is physically excited by the cathedral and willingly allows himself to be transported by it to another world. But to Anna, it's merely a thing of the past and she rather resented his ecstasy, wishing he might curb his enthusiasm.

"The cathedral roused her too. But she would never consent to the knitting of all the leaping stone in a great roof that closed her in [...] it was the ultimate confine [...] She claimed the right to freedom above her, higher than the roof. [...]
So that she caught at little things, which saved her from being swept forward headlong in the tide of passion that leaps on into the Infinite [...] the wicked, odd little faces carved in stone, and she stood before them arrested.
These sly little faces peeped out of the grand tide of the cathedral like something that knew better. They knew quite well, these little imps that retorted on man's own illusion, that the cathedral was not absolute. They winked and leered, giving suggestion of the many things that had been left out of the great concept of the church."

Understandably, Will is unimpressed with such thinking and has little or no time for the carved faces; his wife was "spoiling his passionate intercourse with the cathedral" and this made him bitterly angry:

"Strive as he would, he could not keep the cathedral wonderful to him. He was disillusioned. That which had been his absolute, containing all heaven and earth, was become to him as to her, a shapely heap of dead matter [...]
His mouth was full of ash, his soul was furious. He hated her for having destroyed another of his vital illusions."

Anna's nihilism, however, inasmuch as it's a counter-idealism, is an active negation of the negative and of nothingness. Thus, despite Will's initial anger and despair, gradually he became more responsive to the call of the gargoyles than to the perfect surge of the cathedral itself, realising that outside the cathedral "were many flying spirits" that could never be contained within the holy gloom.

"He listened to the thrushes in the garden, and heard a note which the cathedrals did not include: something free and careless and joyous. He crossed a field that was all yellow with dandelions [...] and the bath of yellow glowing was something at once so sumptuous and so fresh, that he was glad he was away from his shadowy cathedral.
There was life outside the church. There was much that the church did not include. [...] He thought of the ruins of the Grecian worship, and it seemed, a temple was never perfectly a temple, till it was ruined and mixed up with the winds and the sky and the herbs."

And so, my advice to the good people of Paris is this: either finish the job and demolish the rest of Notre-Dame, or leave it as a lovely ruin, roofless, and at the mercy of the elements.

Posted by Stephen Alexander at 19:11 7 comments:

Comes Over One An Absolute Necessity to Move ... (A Lesson in Disillusion) 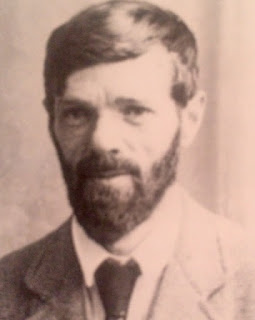 One of the sentences that I've always admired in Lawrence was written in a letter to Mary Cannan, composed whilst on board a ship taking him around the South Sea Islands: Travel seems to me a splendid lesson in disillusion - chiefly that.

This perfectly displays Lawrence's fierce and uncompromising intellectual integrity, rather than cynicism, world-weariness, or a Socratic borrowing as some critics mistakenly assume. For despite desperately wanting to believe in the hope and promise of new lands and new people, Lawrence wasn't prepared to lie to himself or to others; he would always give a brutally honest account of what he found on the other side of the fence, or, for that matter, the other side of the world ...

Lawrence left Europe in February 1922. He was thirty-six and keen to make a symbolic break with the past - to come unstuck from his old life, as he put it - despite the pain of such a process (he admitted to weeping inside himself as the ship sailed through the Strait of Messina). He was, as one sympathetic commentator points out, probably only too aware of the futility of any attempt to make a clean getaway and conscious also that he would doubtless suffer disappointments and set backs on his travels.

And, sure enough, arriving in Ceylon, Lawrence quickly discovered it wasn't for him. Lovely to look at, certainly, but hot - very hot - and full of noisy birds and creatures and the nauseating sweet smell of the tropics (coconut oil mixed with hot blood and thin sweat). Being so far from England suddenly made him feel very English - in the teeth of all the world. After only six weeks, he'd had enough.

His next stop, Australia, Lawrence found rather more congenial. And he spent a little over three months there before deciding - having begun his savage pilgrimage - to move on once more; determined to experience as many new things and places as possible, if only so as to discover how hateful they were.

On August 11th, Lawrence set sail for San Francisco, via Rarotonga and Tahiti. As indicated, the supposedly glamorous islands left him less than impressed, particularly the latter. In the letter to Mary Cannan quoted earlier, he concluded: "These are supposed to be the earthly paradises ... You can have 'em."

However, several years later, in a review of H. M. Tomlinson's Gifts of Fortune (1926), Lawrence sought to subtly - but significantly - qualify his position. Thus, whilst confirming his conviction that disillusion and disappointment were inevitable, he nevertheless stressed that the search for some unknown land, or some strange people who could transform one's own inner life, remained valid and of vital importance:

"We travel, perhaps, with a secret and absurd hope of setting foot on the Hesperides, of running our boat up a little creek and landing in the Garden of Eden. This hope is always defeated. There is no Garden of Eden, and the Hesperides never were. Yet, in our very search for them, we touch the coasts of illusion, and come into contact with other worlds."

For further details of Lawrence's time in Ceylon, Australia, and the South Seas, see one or more of the following works:

Posted by Stephen Alexander at 16:47 3 comments: