Carry on Plautus: The Romans in Films and on TV 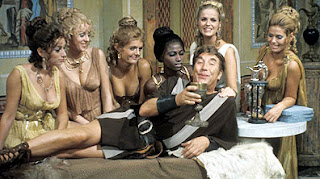 
According to Barthes, the method favoured by Hollywood to signify Ancient Roman masculinity is the insistent use of a particular hairstyle. In MGM's 1953 adaptation of Shakespeare's Julius Caesar, for example, all the male characters are wearing fringes:

"Some have them curly, some straggly, some tufted, some oily, all have them well combed, and the bald are not admitted, although there are plenty to be found in Roman history. Those who have little hair have not been let off for all that, and the hairdresser - the kingpin of the film - has still managed to produce one last lock which duly reaches the top of the forehead, one of those Roman foreheads, whose smallness has at all times indicated a specific mixture of self-righteousness, virtue and conquest."

The fringe and forelock method, says Barthes, is a sign system operating in the open that not only affords the actor instant historical plausibility, but also provides the audience with overwhelming evidence that they're watching a realistic on screen portrayal of Ancient Rome. Even the non-Romanness of Anglo-American faces doesn't overly distract or amuse; everyone is reassured by this simple technique.

But, one might ask, what of the Roman women; how is their femininity signified within popular culture (and the pornographic imagination)?

Unfortunately, Barthes doesn't provide us with an answer, although he does note how, in the same film, Portia and Calpurnia are both awoken during the dead of night and their "conspicuously uncombed hair" not only expresses their nocturnal surprise, but their inner turmoil and vulnerability (he calls this a sub-sign in the category of capillary meanings).

Given his interest in the language of fashion, I suspect that, had Barthes chosen to analyse this subject, he'd almost certainly have done so in terms of clothes and make-up and related his remarks once more to the cinema. But for someone of my generation and background, growing up in late-sixties/early-seventies Britain, the key point of reference and source of all knowledge about the world (be it true or false, laudible or reprehensible), is television.

Thus it is that my idea of the typical Roman matron was formed by Elizabeth Larner as Ammonia in Up Pompeii. And my stereotypical fantasy of saucy Roman sexpots is similarly shaped by the nubile young actresses in skimpy outfits performing alongside Frankie Howerd, including Georgina Moon as Erotica.

However, whilst Up Pompeii can be discussed from many critical perspectives, I'm not sure it's possible to read it semiotically. For its signs lack any ambiguity and are neither extreme nor intermediate in the Barthesian sense of these terms.

In other words, Up Pompeii aims neither at realism nor artifice; nor even the duplicity peculiar to bourgeois art (i.e. the hybrid form of naturalness). Viewers are not asked to believe in what they're watching, but neither are they obliged to suspend disbelief; they're simply invited to enjoy the show in all its Carry On style campness and vulgarity.

Barthes would probably have found it boring; not even a degraded spectacle. But I've a suspicion that the Roman playwright Plautus, whose Greek-style comedies relying upon crude puns and stock characters such as the scheming slave and lecherous old man inspired the writers and producers of Up Pompeii, would have laughed at the antics of Lurcio and company ...

Posted by Stephen Alexander at 13:01 No comments: