Pamela and the Lost World of Soho 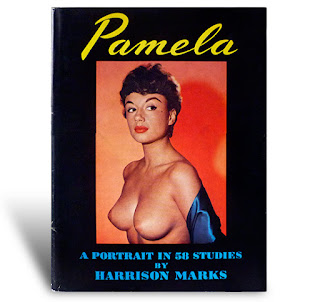 We are all born naked; but we are not all born to be naked. For as Nietzsche says: "A naked human being is generally a shameful sight."*

But that's not true of everyone. There are some, like the glamour model and actress Pamela Green, who look fantastic either in or out of their clothes and it's fitting that she made the first full-frontal screen appearance in a British feature film; as Milly, in Michael Powell's pervy psychological thriller, Peeping Tom (1960).

Born in 1929, and the only child of an English father and a Dutch mother, Pamela spent her first ten years living in the Netherlands. Shorty before the outbreak of war, however, she and her parents moved to England.

Always keen on painting and drawing, in 1947 she was accepted on to a course at St. Martin's, where she also began working as a life model in order to help pay for her studies. Miss Green soon discovered, however, that she could make much better money by posing for photographers who were not particularly interested in art. Her saucy snaps proved so popular with punters that many Soho bookshops and backstreet newsagents stocked postcard sets featuring her and, indeed, supplied by her.

Fans could also see Pamela in the flesh working as a dancer in several West End theatres, including the Hippodrome, or on stage in shows that incorporated static tableaux of the type made famous by the Windmill; i.e., shows in which models were nude, but remained perfectly motionless, like statues, in accordance with the laws of the land.

In 1955, a pictorial monograph was published by Luxor Press entitled Pamela, featuring photographs by her lover and business partner George Harrison Marks, with whom she set up Kamera Publications, responsible for several top shelf magazines. As their success grew, the couple ventured into the world of 8mm striptease films, producing classics such as Naked as Nature Intended (1961), written and directed by Marks and starring Miss Green in a happy state of undress.

Today, London’s once sleazy yet exhilarating district of pubs, cafes, and clubs, has been transformed by the relentless tide of gentrification and every red light dimmed. I fully support the work being done by Tim Arnold, Stephen Fry, Colin Vaines and others involved with the Save Soho campaign, but, in all honesty, there's very little left to preserve other than memories; for even the spirits of the dead seem to have departed ...

Those interested in the work of Harrison Marks should visit: thekameraclub.co.uk.

Posted by Stephen Alexander at 12:31 No comments: