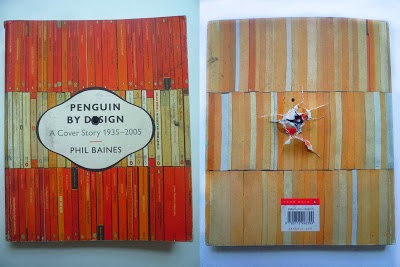 There are many ways to display one's love of literature, but until I came across the very wonderful series of works entitled Wounded Books by Greek-born, London-based artist and bibliophile Christina Mitrentse, I must admit that the idea of shooting Penguin paperbacks with a rifle never occurred to me.


Initially produced in response to the bombing of a street in Baghdad famous for its bookshops, Miss Mitrentse has powerfully and yet rather poignantly emphasized the vulnerability of ideas and bodies of knowledge and, in more general terms, the fragility of material objects. Nothing serves better than a bullet hole, it seems, to remind us of this.


And yet, having said that, literature is certainly not innocent and whilst books can be subject to violence, so too can they often incite, sanction, and justify violence (often in the name of Love). Ultimately, books are as complicit with evil as any other assemblage of power-knowledge and we shouldn't revere them, accept their authority without question, or believe them to contain eternal truths.


And this is why I have trouble with Anna McNay's recent interpretation of Wounded Books, posted on her blog, art-Corpus, in which she reads the work in terms of religious metaphor to do with the incarnation of the holy spirit, thereby turning bullet holes into stigmata and the book into the body of Christ. It's a reading that is both unconvincing and peculiarly offensive in its theological musing and psycho-sexual idealism.


For books, being mortal things, are not without sin and, arguably, they have caused more suffering and death - precisely when accorded divine status as sacred works - than all the weapons in the world.


Indeed, I rather hope that Miss Mitrentse will one day dare to fire bullets through the Bible, the Quran and all the other founding texts which root themselves in our heads and in our hearts until we can no longer think or feel outside of the binary logic that is their spiritual reality. Shoot these root-books Christina and allow a little fresh air to circulate between their pages. You'll be doing us all a great service if you do.

Those interested in the work of Christina Mitrentse should visit christinamitrentse.com
Those who want to read Anna McNay's post should go to http://art-corpus.blogspot.co.uk/2013/12/christina-mitrentses-wounded-books

Posted by Stephen Alexander at 18:28 No comments: