The Naked Look: In Praise of the Backless / Strapless Dress 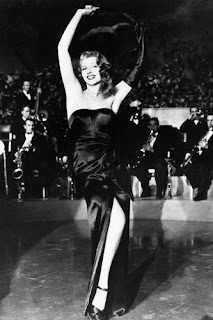 
Being something of an omosophile, I've always had a thing for necks, shoulders, and bare backs - though would draw the line at the buttocks (I'm not much of a pygophile). I am, therefore, a fan of the backless dress, which - if I recall my fashion history correctly - first appeared in the Roaring Twenties and was designed to expose the above areas of the female body to stunning effect.

Of course, the amount of flesh revealed varies with the style of dress. Personally, I'm not too fussed how low it's cut as long as the neck and shoulders are naked and the dress is held up either with ultra-thin spaghetti straps that look as if they might break at any moment, or fastened, halterneck style, with a strap that passes from the front of the garment and behind the wearer's neck where it's covered by her hair, thus creating the happy illusion from behind that the dress is kept in place simply by the grace of God or a gravity-defying act of will.

If a woman chooses to wear a bra with such a dress it obviously has to be strapless. But daring to go bra-free is probably the best option and adds to the dangerous appeal of the dress - something which is even further enhanced if the latter itself is of a strapless variety, without any visible means of support.

There are, I know, many women who secretly long to wear such a dress, but worry about exposing rather more than intended should it suddenly slip south. However, those concerned about the practicality of wearing a risqué strapless number might find some reassurance watching Rita Hayworth in a famous scene from the classic film noir Gilda (1946), in which she wears an iconic strapless design by Jean Louis, inspired by Sargent's Portrait of Madame X (1884).

The dress - a black satin sheath with a straight neckline leaving the shoulders, arms and upper-back all beautifully bare - helped consolidate Hayworth's image as a femme fatale and was said to illustrate that unrestrained female sexuality ultimately leads to catastrophe. It's not merely coincidental, therefore, that the first nuclear bomb to be tested after the Second World War was nicknamed Gilda and decorated with an image of Rita wearing her notorious black dress.

For added good measure, the floor-length dress also has a thigh-high slit, so we can fully appreciate the fact that Gilda's got legs (and knows how to use 'em). Finally, it will be noted that the dress is worn with a pair of matching full-length gloves, pushing the fetishistic appeal of the scene to the maximum. Illicit lovers of every stripe can find something to perv on in this scene.

Of course, it goes without saying that all the usual suspects who like to decry the immodesty of fashion, bemoan the objectification of the female body, or condemn the half-naked women of today for cynically exploiting their sexuality, have attacked the backless/strapless dress. However, the ravings of such puritans need not detain us here ...

See: Rita Hayworth as Gilda performing the number 'Put the Blame on Mame' (written by Allan Roberts and Doris Fisher) in the film Gilda (dir. Charles Vidor, 1946): click here. Note: it's not actually Miss Hayworth singing; the voice belongs rather to Anita Ellis.