Reflections on a Forgotten Umbrella 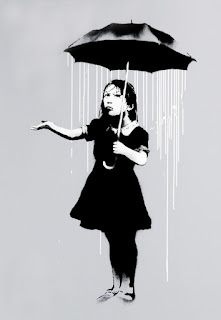 Ich habe meinen Regenschirm vergessen: I have forgotten my umbrella.

This five word sentence from one of Nietzsche's notebooks, neatly enclosed in quotation marks but without any contextualising information that might help us understand it, has intrigued many readers - not least Derrida, who attempted to deconstruct it in typically exhaustive fashion.

We could, of course, just take its meaning literally: we know that Nietzsche owned a red umbrella which, when in Turin, he liked to carry with him in order to shield his eyes from the bright Italian sun. So it's perfectly possible that he might, in fact, have one day forgotten it - just like all those other people who do so each and every day in towns and cities around the world; it's nice to sometimes imagine Nietzsche not as an anti-Christ or Übermensch, but just a slob like one of us.

Some scholars, however, are convinced that these words have greater significance; that perhaps the word umbrella refers not to an everyday object, but to something far more mysterious and important - i.e., that umbrella is used here metaphorically. Again, that's certainly possible. But, personally, I prefer to think of Nietzsche's umbrella as an actual thing which is in itself of great interest, as the writer Marion Rankine illustrates in her amusing book Brolliology (2017).

Rankine reminds us that whilst umbrellas play only a minor role within philosophy and literature, there have nevertheless been several writers and thinkers - including Charles Dickens and Robert Louis Stevenson - who turned their attentions to these curious hand-held devices that can open and shut like artificial flowers and afford us protection from the elements. Or, indeed, from tigers and assailants; for many a person has used their brolly as a weapon, as well defensively as a shield.

Sadly, as Rankine also reminds us, umbrellas are, today, often degraded objects; mass-produced in Chinese factories and no longer treasured by their owners. Once upon a time, they were carefully made by craftsmen using beautiful materials and expensive models were a sign of social status (one of the ways that Robinson Crusoe distinguished himself from Friday was by making himself an umbrella which, when not in use, he carried with him under his arm like a gentleman).

In fact, an umbrella revealed not only an individual's class, but served as a reliable indicator of their taste, style and personality. Today, their construction is so poor and flimsy that umbrellas can hardly even be relied upon to keep you dry; the first gust of wind and they flip inside out like a giant bat's wing or collapse entirely, to be thrown away with an angry curse, but without concern.

One hardly dares to think what this says about us as a culture ... It's as if we've forgotten ourselves.

Marion Rankine, Brolliology: A History of the Umbrella in Life and Literature (Melville House, 2017).

Posted by Stephen Alexander at 15:20 No comments: