Executing Elephants Part I: The Case of Mary (Death by Hanging) 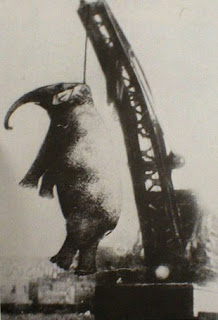 Having read the recent post written on Tyke, the so-called elephant outlaw [click here] who killed her abusive trainer and rebelled against a life as a circus performer - briefly enjoying a few moments of rampaging freedom before being shot and killed by the police - Zena writes and asks if I'm familiar with any other similar cases involving captive elephants.

Well, it just so happens - even though I make no claims to being an expert in this area - that I am aware of three such cases, the first of which, the case of Mary, I'd like to briefly recount here.

Mary was a much-loved circus elephant, famous for standing on her head, playing musical instruments and pitching baseballs with her trunk. Tragically, after killing a trainer in Tennessee in September 1916, she was put to death by hanging.

The unfortunate - and unqualified - trainer, Red Eldridge, who drifted in and out of employment when not living the happy life of the hobo, was sitting atop Mary as she led the elephant parade through Sullivan County. After apparently stopping to eat a watermelon by the roadside, Mary was given a sharp prod behind her ear with a bull-hook. This proved to be a fatal, final act of cruelty on Elridge's part. Enraged, Mary snatched the puny human off her back, threw him to the ground and stepped on his head - crushing it, ironically, like a watermelon.

Details of what happened next are confused and contradictory; forever lost in a mix of sensationalist newspaper accounts and popular legend. Although it seems that Mary quickly calmed down and didn't make any attempt to run off or hurt any onlookers, locals demanded violent retribution; an eye for an eye and a tusk for a tooth.

Fearing for the future of his circus if he didn't comply with this demand to punish the elephant, Charlie Sparks reluctantly agreed to a public execution. Thus, on a miserable day in Erwin, Mary was taken to a railroad yard and hanged by the neck from an industrial derrick crane in front of two-and-a-half thousand cheering spectators (including most of the town's children).

The first attempt to execute poor Mary failed when the chain round her neck snapped, causing her to fall and break her hip. Severely wounded, she was hoisted back up with a new chain and killed on the second attempt. Mary was then buried by the tracks, but only after a vet examined the corpse and discovered that she had a severely infected tooth that would have caused her great discomfort precisely in the spot where Eldridge foolishly prodded her.

Posted by Stephen Alexander at 18:41 No comments: