Dollification: The Cases of Bastian Schweinsteiger and Alexander Hepburn 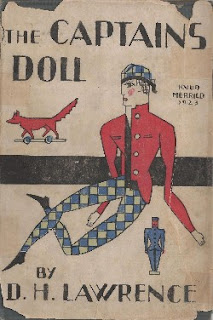 Cover of the first US edition (1923)
by Knud Merrild

I: The Case of Bastian Schweinsteiger

There was an amusing story in the press a couple of years ago concerning the German footballer Bastian Schweinsteiger and his lawsuit against a Chinese toy company that had manufactured an action figure that bore an uncanny resemblance to him.

The fact that the doll also came dressed as a Nazi soldier and was named Bastian, pretty much obliged the midfielder to take legal action, even though a spokesman for the company brazenly attempted to deny the undeniable by insisting that any likeness was purely coincidental. He further explained that, to Chinese eyes, all Germans look alike ...!

I've no idea if the case went ahead, or if there was some kind of out-of-court settlement; one assumes the doll has been withdrawn from sale, but even that I don't know for certain. At the time, most people simply smiled at the story and then quickly forgot about it. But it always stuck with me. And that's because, as a reader of Lawrence, it reminds me of the case of Alexander Hepburn ...


II: The Case of Alexander Hepburn

Written in 1921 and published two years later, The Captain's Doll is a short novel by D. H. Lawrence that tells the tale of an illicit love affair between an aristocratic German woman, Johanna zu Rassentlow (known as Hannele), and a Scottish army officer, Capt. Hepburn.

Thanks to the War, she has fallen on hard times and so has to work for a living making puppets and beautiful cushions of embroidered coloured wool. He, arguably, has been damaged in other ways by the years of bloody conflict and evolved his own idiosyncratic philosophy based on his love of the moon that he's keen to enact in his own life, without any further compromise and at whatever cost.

If the existence of a wife, Evangeline, is problematic to his future happiness and his relationship with Hannele, so too is the existence of a doll that the latter makes of him, complete with tight-fitting tartan trews. A doll which not only accurately captures his physical likeness, but seems to insult the integrity of his being; objectifying him and belittling him at the same time:

"It was a perfect portrait of an officer of a Scottish regiment, slender, delicately made, with a slight, elegant stoop of the shoulders and close-fitting tartan trousers. The face was beautifully modelled, and a wonderful portrait, dark-skinned, with a little, close-cut, dark moustache, and wide-open dark eyes, and that air of aloofness and perfect diffidence which marks an officer and a gentleman."

Personally, I'd love to be dollified and wouldn't find it in any way unseemly or humiliating, whoever made it and however it was costumed. But Hepburn reacts very differently, when he one day sees the toy version of himself standing in a shop window. He stood and stared at it, as if spellbound; so disgusted that he wouldn't enter the little art shop:

"Then, every day for a week did he walk down that little street and look at himself in the shop window. Yes, there he stood, with one hand in his pocket. And the figure had one hand in its pocket. There he stood, with his cap pulled rather low over his brow. And the figure had its cap pulled low over its brow. But, thank goodness, his own cap now was a civilian tweed. But there he stood, his head rather forward, gazing with fixed dark eyes. And himself in little, that wretched figure, stood there with its head rather forward, staring with fixed dark eyes. It was such a real little man that it fairly staggered him. The oftener he saw it, the more it staggered him. And the more he hated it. Yet it fascinated him, and he came again to look.
And it was always there. A lonely little individual lounging there with one hand in its pocket, and nothing to do, among the bric-à-brac and the bibelots. Poor devil, stuck so incongruously in the world. And yet losing none of his masculinity.
A male little devil, for all his forlornness. But such an air of isolation, or not-belonging. Yet taut and male, in his tartan trews. And what a situation to be in! - lounging with his back against a little Japanese lacquer cabinet, with a few old pots on his right hand and a tiresome brass ink-tray on his left, while pieces of not-very-nice filet lace hung their length up and down the background. Poor little devil: it was like a deliberate satire."

One wonders if Schweinsteiger also felt this way when seeing his doll for sale: disgusted, but fascinated; staggered, but spellbound ...? If so, then, as one commentator has noted, we can hardly begrudge him taking legal action.

Towards the end of the novella, Hepburn confronts Hannele on the issue of the doll when hiking in the mountains (which she loves, but which he hates for their snow and affectations). He suggests that she might marry him - but he doesn't want her love, for it was love from which the doll was born. She is understandably full of perplexed rage at the things he says to her; including his claim that the handcrafted effigy does him the greatest possible damage - even if he can't quite explain why:

"'I don't know. But there it is. It wasn't malicious. It was flattering, if you like. But it just sticks in me like a thorn: like a thorn. ... And you can say what you like, but any woman, today, no matter how much she loves her man - she could start any minute and make a doll of him. And the doll would be her hero: and her hero would be no more than her doll. ... If a woman loves you, she'll make a doll out of you. She'll never be satisfied till she's made your doll. And when she's got your doll, that's all she wants. And that's what love means. And so, I won't be loved. And I won't love. I won't have anybody loving me. It is an insult. I feel I've been insulted for forty years: by love, and the women who've loved me. I won't be loved. And I won't love. I'll be honoured and I'll be obeyed: or nothing.'"

Appalled by this line of thinking, Hannele dismisses Hepburn as a madman of conceit and impudence. Nevertheless, she agrees to accompany him to Africa, where he plans to help establish a farm and, when he's made a few more observations and established all the necessary facts, write a book on the moon.

And so Hepburn promises to call for her in the morning, before pulling back quickly into the darkness ...

Note: The Captain's Doll (1923) can be read online as an eBook thanks to Project Gutenberg of Australia: click here.

Posted by Stephen Alexander at 14:39 No comments: