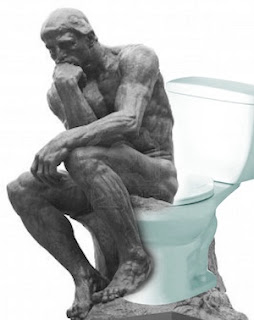 "[There are] three different attitudes towards excremental excess:
an ambiguous contemplative fascination; a wish to get rid of it as fast as possible;
a pragmatic decision to treat it as ordinary and dispose of it in an appropriate way."

Faced with a 48-hour (non-figurative) shitstorm, I've come to the conclusion that there's really nothing funny about anorectal dysfunction and that bowel incontinence is not only beyond the pale, but beyond a joke.

Scatological humour might solicit laughter, but I agree with Cindy LaCom that this laughter is always rather hollow and "limited in its power to diminish public shame around the biological fact of shit".

Indeed, we might think of such gross-out comedy as a nervous defence mechanism designed to reduce anxiety and distance ourselves from the grim - often disgusting - reality of bodies subject to chaotic violence (bodies that have lost all integrity and self-control).

If the obscene is a loss of perspective that renders aesthetic judgement impossible, then horror might be defined as a shattering of taboo that results in a loss of illusion; i.e., it's the way in which the world rubs our noses in our own filthy mortality and its own base materialism. No matter how idealistic you are, you can't polish a turd. And you can't stop it stinking.

Thus, even if there's nothing to laugh about when a frail and demented old woman shits her pants seven times in a weekend (the consequence of prescribing an aggressive laxative administered during a month long stay in hospital), there is something philosophically important to reflect upon ...

Whilst clearly understanding the complex psycho-cultural reasons behind coprophobia, Georges Bataille and D. H. Lawrence both affirm the fact that human beings shit. Indeed, rather than seeing the act of defecating as something shameful, they think it should be acknowledged and celebrated.

Thus, in Lady Chatterley's Lover, for example, Mellors famously tells Connie as he strokes her soft sloping bottom and fingers the two secret openings to her body - "'An' if tha shits an' if tha pisses, I'm glad. I don't want a woman as couldna shit nor piss.'"

I understand the point that Lawrence is trying to make here: he wants the human mind to free itself of its fear of the body and the body's potencies. For in his view, "the mind's terror of the body has probably driven more men mad than ever could be counted" and it's monstrous that anyone should be made to feel morally ashamed of their natural bodily functions.

That's fine. But I can't help wondering whether Mellors would be quite so un-Swiftian if Connie experienced a catastrophic loss of bowel control during the night of sensual pleasure ... Further, I have to admit - following recent experiences - that perhaps we need our illusions, our taboos, our lies surrounding the body.

Ultimately, perhaps it's preferable to have stars rather than shit in our eyes and not so unforgivable to find comfort in the reassuring smell of bleach ...

Posted by Stephen Alexander at 18:36 No comments: