To Have Done With the Judgement of Judy 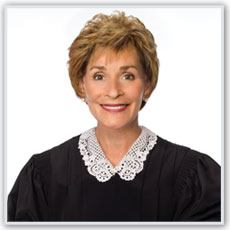 If you live to be a hundred,
you will never be as smart as I am.

Like millions of viewers worldwide - particularly female viewers aged between 25 and 54 - I feel a lot of love for Judith Sheindlin, or Judge Judy, as she's known when dealing with real cases, real people in a Hollywood film studio mocked-up to resemble a courtroom and full of hired extras performing as instructed.

For twenty years, this fast-talking, no-nonsense New Yorker, has presided over the airwaves in her award-winning reality show, clocking up almost 6000 episodes in that time. She's the acknowledged queen of daytime TV and one of its highest earners. An icon of popular culture, a poll once revealed that a majority of Americans trust her more than any of the Supreme Court justices.

However, despite my fondness for Sheindlin - an attractive and intelligent woman in her seventies - I've found myself increasingly uncomfortable with the spectacle of a well-educated, highly successful, extremely wealthy individual in a position of authority instructing people who are markedly less fortunate to put on their listening ears just so she can berate and insult them for the amusement of viewers such as myself.

It's not her abrasive manner per se that concerns me and I don't believe like one of her most ferocious critics and fellow judge, Joseph Wapner (the first ever star of an arbitration-based reality court show), that she's a disgrace to the profession who purposely demeans those who appear before her. Sheindlin's schtick is mostly performative; she understands that the show is intended to entertain and generate ratings, not provide an accurate portrayal of the justice system.

It's just that it can be a bit galling when a woman earning $47 million dollars for 52 days work a year tells someone struggling to pay their debts about the necessity of living within their means, or suggest they they might make extra money collecting cans. And, what's more, just because you don't have a law degree, doesn't mean you're stupid; just because you don't have a star on the Hollywood Walk of Fame, doesn't make you a loser.

Having said that, those who appear on Judge Judy - described by hardcore fans as the endless parade of idiots - are consenting adults and must have at least an inkling of what they sign up to. Further, both plaintiffs and defendants receive an appearance fee, plus all expenses are paid for them and their witnesses, including flights and hotels.

In addition, it should be noted that the award for each judgment is also paid by the producers of the show and not the losing party - a fact that blows a rather large hole in the conceit that Judge Judy is about making individuals acknowledge their responsibilities and not allowing them to benefit from acts of wrongdoing, no matter how small in scale their infringements of the law may be.

This is why Lady Justice lifts her blindfold in the opening credits and winks to the camera; she knows perfectly well what's going on and it's the viewer who is expected to turn a blind eye to the truth of events in Sheindlin's fantasy courtroom.

Posted by Stephen Alexander at 18:44 No comments: