Endgame: the Case of Nazi Paikidze 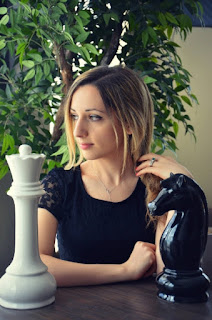 Russian-born, US-living, 22-year-old chess-master, Nazi Paikidze, is one of those women who invites use of the sexist cliché concerning an apparently rare combination of beauty and brains (I say apparently because I have no way of knowing what percentage of women are both very attractive and very intelligent, though suspect it's much higher than commonly believed - and almost certainly higher than the number of men who are gifted with good-looks and a brilliant mind).

However, Nazi is not only beautiful and brainy, but someone prepared to actively take a stand in public against the religious oppression of women, having recently announced that she will boycott the 2017 Women's World Chess Championship in Tehran, due to the enforcement of an Islamic dress code that requires all participants to wear a hijab or face action from the morality police.

Even though this will mean missing an important tournament and risk damaging her career as a professional chess player, Nazi has categorically refused to cover her hair in order to compete and thereby show complicity with a phallo-theocratic regime in which women are denied fundamental rights and freedoms.

For this, Torpedo the Ark salutes Ms Paikidze. Her protest shames those politicians, commentators, fashion designers, etc. who would normalize the wearing of a veil even in secular-liberal Western society, wilfully turning a blind eye to the fact that it's a symbol of, at best, sexual discrimination and, at worst, violent misogyny.

And shame too on those appeasers and apologists within the chess world's governing body, including Susan Polgar, who have tried to silence Nazi on this issue, insisting she should keep her views to herself and learn to respect cultural differences, rather than standing by the women of Iran who are courageously (often secretly) seeking to reform a society (and a religion) that denigrates them on the on hand, whilst fetishizing their purity on the other.


Note: Readers interested in the campaign for the right of individual women in Iran to choose whether or not to cover their hair in public, should visit My Stealthy Freedom; an online social movement started by Iranian journalist Masih Alinejad - another brave, beautiful and brilliant woman.

Posted by Stephen Alexander at 15:13 No comments: