Evening All: Reflections on the Case of PC Semple 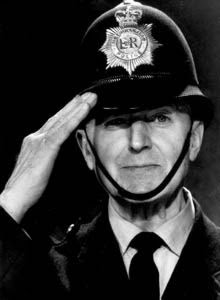 Every now and then a story comes on the news that leaves me spluttering in the breakfast bowl; not so much in moral outrage, as amused disbelief.

One such story is that of PC Gordon Semple, 59, who, tragically, was murdered by an Italian Lothario, Stefano Brizzi, with whom he'd arranged a sexual liaison via Grindr, the world's most popular gay dating app.

Details of the crime are sordid and shocking enough: the hapless bobby, who was simply looking for some sado-masochistic fun with a like-minded fellow, was strangled and dismembered. Over the course of the next few days, Brizzi attempted to dissolve the remains in an acid-filled bathtub - but not before cannibalising some of the tastier body parts (toothmarks were found by a forensic dentist on one of the policeman's ribs and puddles of human fat were discovered inside the poorly cleaned oven).

As appalling and abhorrent as these details are, they aren't what made me choke on my cornflakes; this, rather, was caused by a victim impact statement read to the court by PC Semple's older brother, Ronald,  during Brizzi's trial at the Old Bailey.* In the statement, he said Gordon was a caring and gentle person, much loved by his family and friends, who were left devastated by news of his murder, blah, blah, blah.

So far, so platitudinous: but then he adds - preposterously - that his sibling deserved to be remembered by the community he served for over thirty years as a real-life Dixon of Dock Green ...!

I have to say - with no disrespect to the deceased, his colleagues, his grieving family and friends, or members of the queer community - that's a bit rich ...


Note: Brizzi was convicted of murder and sentenced to life imprisonment (instructed he'll serve a minimum of 24 years).

Posted by Stephen Alexander at 18:51 No comments: