Vaginal Seeding: Why C-Section Babies are Dipped in Love Juice 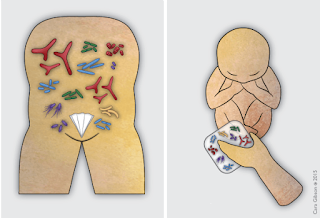 Illustration by Cara Gibson (2015) of vaginal seeding procedure.
The left panel shows a sterile gauze incubating in the vagina prior to C-section.
The right panel shows the gauze colonized by vaginal microbes being swabbed on the newborn.
mostlymicrobes.com


In the UK today approximately 1 in 4 births are by Caesarian section. This figure is lower than the US and Australia where around a third of babies are delivered via surgical incisions in the abdomen and uterus, but it has significantly increased during the last couple of decades. In 1990, for example, still only around 10% of births were C-sections and these were mostly carried out on medical grounds to protect the well-being of mother and child.

Doubtless there are many reasons for this development; pregnant women in the West are often now much heavier and much older, for example, and this may necessitate the real or perceived need for a Caesarian.

But we must also mention the narcissistic arrogance of those women too posh to push who regard giving birth 'naturally' as messy, painful, inconvenient and archaic. For such women, a Caesarian is not so much an emergency procedure as it is a combination of human right, professional expediency, and a sign that one can afford to be bang on trend when it comes to the latest fashion in obstetrics.

Of course, it's not simply the mothers-to-be to blame; as with the boom in cosmetic surgery the medical profession is doubtless complicit in the insidious rise in the number of C-sections performed and the normalization of such. It's worth noting that in the US a hospital can charge many thousands of dollars more for a non-vaginal delivery.

And then there's the Hollywood factor: I read recently in a popular fashion and gossip magazine, that it's not only the biggest names in film, TV, and popular music who are electing to have their babies this way: Even C-list celebrities are crazy for C-sections.

Whatever, the reason, the sad fact is that children born in this manner seem to be more prone to a range of medical conditions including asthma, obesity and, later in life, diabetes. The reason for this brings me back to a topic currently of much interest: vaginal fluid.

It seems that babies born via the birth canal receive a sticky coating of lubrication containing a vital cocktail of immune-boosting microbes. Babies delivered surgically, however, miss out on this and as a result suffer a bacterial deficit which, some scientists now speculate, may be a key factor in the health problems more frequently found in those born by Caesarian.

I find it interesting and amusing that the same salty elixir that is deadly to sperm due to its acidity and which commonly carries the cancer-causing HP virus that nearly did for Michael Douglas, is so beneficial for babies that even C-section newborns are now being swabbed with their mother's cunt juice.

Posted by Stephen Alexander at 18:29 No comments: