In Memory of Liz Fraser 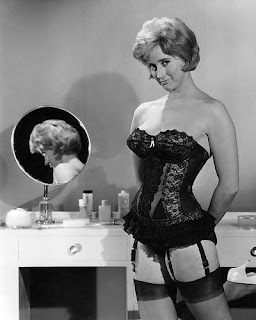 I was very sorry to hear of the passing two days ago of busty British beauty and much-loved Carry On star Liz Fraser, aged 88.

For anyone like me who loves TV of the sixties and seventies, it's impossible not to think fondly of Miss Fraser, who had roles in many classic shows, including: Hancock's Half  Hour, Dad's Army, The Avengers, and Randall and Hopkirk (Deceased).

And anyone like me who loves the Sex Pistols, will also recall that, like Irene Handl and Mary Millington, she also pops up in The Great Rock 'n' Roll Swindle (dir. Julien Temple, 1980).

Thus, with her place in the popular cultural (and pornographic) imagination happily secure, she can, I hope and trust, rest in peace.

Posted by Stephen Alexander at 07:52 No comments: 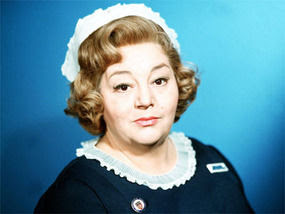 But, for the British, reared as they have been within a Carry On culture, the figure of the nurse also plays an important role within the comic imagination.

And so it's virtually impossible - unless you're as humourless as many perverts are - to take the sexual stereotype seriously for long: fetishistic medical fantasies are invariably undermined by fond memories of Hattie Jacques.

Posted by Stephen Alexander at 16:57 No comments: