Why I Love Carry On Teacher 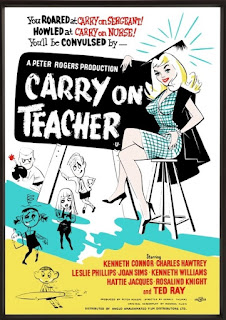 Print by artandhue.com
based on the original film poster

Carry On Teacher (dir. Gerald Thomas, 1959) is the third in the long-running Carry On series of film comedies and one of my favourite movies set in the classroom (as it is one of Morrissey's) ...

It features Ted Ray, who does a sterling job in this, his only Carry On role, alongside the usual suspects. Leslie Philips also puts in another ding-dong performance in what, sadly, will be his final Carry On until the much mistaken last entry in the series, Carry On Columbus (1992), once voted the worst British film ever made.

Fans of classic seventies sitcom Man About the House, will also note the presence of a young Richard O'Sullivan as one of the Maudlin Street pupils (coincidentally, he's even named Robin).

And finally, since we're discussing the cast, special mention should also be made of the very wonderful Rosalind Knight, as the severe (but sexy) Ministry of Education Inspector, Miss Wheeler: that hair! that face! those clothes!

But, apart from the actors, what is it that I love about this film so much?

It's the fact that, like all of the early Carry On movies written by Norman Hudis, it has a warmheartedness and a gentle good humour that's hard to resist; a quality that was lost over the years and films that followed as sentiment was increasingly sacrificed for sauciness and character gave way to caricature.

Of course, there's nothing wrong with bawdiness and some of Talbot Rothwell's scripts have elements of genius. But one increasingly finds the sight of Bab's bursting out of her bikini top less amusing than that of Miss Allcock ripping her shorts.

To watch the Carry On Teacher trailer on Vimeo, click here.

Posted by Stephen Alexander at 15:27 No comments: