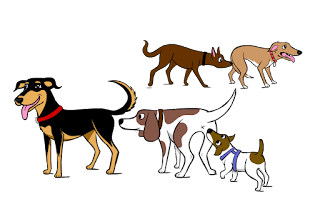 Illustration from the Dog Decoder smartphone app by Lili Chin

However, even the American Chemical Society conclude that canine arse-sniffing is essentially an exchange of information. Only what's being communicated concerns sexual status and dietary habits, for example, rather than how to regain the freedom of revered lupine ancestors.

Finally - since we're discussing this subject - it might be noted that dogs are not enjoying the smell of shit when they stick their noses into the behinds of other dogs.

Indeed, thanks to the presence of Jacobson's organ located inside their nasal cavities, dogs are able to pass subtle chemical information detected in the glandular secretions directly to the brain without being distracted by other more powerful odours.

Posted by Stephen Alexander at 14:35 No comments: