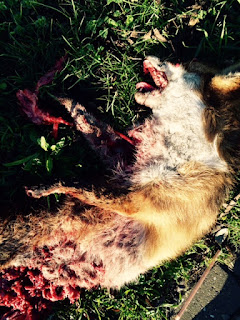 A sparkling ice-cold morning in December: but even beneath cloudless blue skies, and just days before Christmas, chaos reigns ...

Danish film-director and screenwriter Lars von Trier is right: grief, despair, and - above all - pain are ever-present in this world and fundamentally determine the tragic (if extremely rare and unusual) phenomenon that people term life; something they not only value, but desperately cling on to, despite the three beggars.

In one of the most memorable scenes of his 2009 movie Antichrist, Von Trier presents us with a malevolent-looking fox slowly disembowelling itself. As it does so, it looks up at a startled Willem Dafoe (playing the male character known simply as He) and utters the diabolical phrase: Chaos reigns.

This became an instant internet meme and many people thought it was funny: but it isn't funny. Those who find it so are just imbeciles whistling in the dark and if there's one thing I hate it's optimistic bravado; you can laugh at the bloody horror that lies beneath the surface, but don't ever think that in doing so you can laugh it away, or make yourself immune.

Ultimately it's good to show courage in the face of death and evil (which are synonyms for life), but this requires a certain honesty and an acknowledgement of one's own anxiety, not mocking stupidity.

Thanks to Simon Solomon for suggesting this post and reminding me of the above scene in Von Trier's film.

Posted by Stephen Alexander at 18:37 No comments: