On the Portrait of Ms Ruby May, Standing 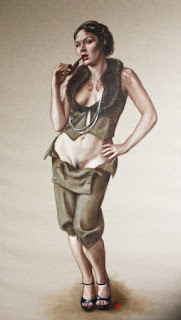 There is something of a tradition within the world of fine art for portraits of women standing.

Dutch Golden Age painter Frans Hals, for example, completed his contribution to this genre sometime around 1610. Indeed, such a lover was he of upright women that he produced another portrait of a woman standing just a few years later (c.1618-20).

Neither of these unidentified women, however, arouses my interest as much as the fabulous Ms Ruby May, pictured above, standing, hand-on-hip and pipe in mouth, by UK based visual artist Leena McCall.

The painting is obviously intended to be sexually provocative. There's that defiant look in the eye of the subject, returning and challenging the male gaze, for a start; clearly this is a woman who knows how to construct and express a playfully ambiguous model of sexual identity on her own terms.

And then there's the fact that her breeches are unbuttoned, exposing her lower body or loins such that her pubic hair is clearly visible ...

I recently published a post reflecting on the issue of female pubic hair, referring to its representation within the world of art.* A woman kindly wrote to me afterwards to say that whilst she enjoyed the piece, she couldn't help thinking it was essentially a non-concern within what she insisted was a sexually liberated  - or, at any rate, sexually indifferent - age:

"Some women wax, some women shave and shape their bushes, and some just leave things to grow naturally; the point is no one really cares and it's not a big issue, even if it remains subject to changing fashion. Thankfully, the days when people freaked out at the sight of a pubic hair have long gone."

I wonder, then, how she explains the fact that McCall's painting was swiftly removed by the Mall Galleries from the Society of Women Artists' 153rd annual exhibition in 2014, following a number of complaints and the concern that perhaps children or vulnerable adults might view it ...?

According to McCall, the picture was branded as pornographic and disgusting precisely because it showed Ms May as an amorous subject proudly displaying her pubic hair as a sign of mature womanhood. Afforded the opportunity to provide a replacement work, McCall admirably refused on the grounds that to do so would be to concede there was something inherently offensive or obscene about the portrait (and/or the body) of her friend Ruby May.

So, to my correspondent I say thank you very much for writing, but I beg to differ with your analysis of the times in which we live.

For if there's been a pornification of culture on the one hand, so too is this the age of safe spaces, trigger warnings, political correctness, censorship, and the new puritanism in which the greatest crime is to cause offence (either wilfully or inadvertently) to the easily offended, be they snowflake liberals, religious maniacs, or - apparently - London gallery owners worried about their trustees and sponsors, etc. ...


* See: Where the Turtle Doves Sing ... the post mentioned above that reflects on pubic hair.