Be Sure to Wear Some Flowers in Your Hair: Notes on the Vinok 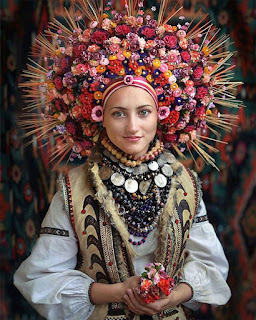 
The penchant for wearing flowers in one's hair was not, of course, something that originated in San Francisco during the Summer of Love; peoples all around the world have been adorning themselves in this fashion for millennia. However, I'm particularly fascinated (at the moment) by the Ukranian floral headdress known in English as the vinok.

Traditionally worn by girls and unmarried women, the vinok has its origins in fertility rites that pre-date Christianity. Signifying virginity, the vinok was also believed to offer protection against evil spirits and followers of Slavic neopaganism - known as Rodnovery - continue to attach magical significance to the vinok.

Whilst mostly worn on festive occasions and holy days, since the 2014 Ukranian revolution the vinok has been increasingly worn in daily life as an expression of national pride and völkisch identity. This might cause concern amongst those suspicious of reactionary populism in Europe. However, it might be noted that the vinok is also often worn by the topless activists of Femen, for whom it signifies a new, insubordinate and heroic model of femininity.*

It might also be noted, finally, that the vinok has influenced the world of fashion and featured in several recent catwalk collections, including the Comme des Garçons Homme Plus Spring 2016 menswear collection, where models wore botanical crowns in a show entitled Armour of Peace:

* Note: it's not coincidental, of course, that although now based in Paris, Femen was founded in the Ukraine and is still led by a Ukranian woman, Inna Shevchenko. Readers might like to know that the Femen Flower Crown - handmade by activists - is available to buy for €35.00 on the Femen website: click here.

Posted by Stephen Alexander at 18:21 No comments:

There's Nowt so Queer as Folk 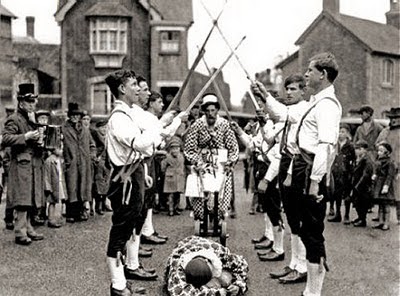 It's perhaps not widely known or remembered, but Lawrence's Lady Chatterley's Lover ends with a long letter written from Mellors to Connie in which, amongst other things, he proposes a non-conventional solution to the industrial problem as he understands it: train the people to live in handsomeness without the need for money.

What this means in practice is a neo-pagan folk revival in which men and women reject capitalism and consumer lifestyles and relearn old skills and handicrafts, as well as how to sing their traditional songs and dance the old group dances (preferably whilst naked). It's an anti-urban as well as an anti-modern fantasy, based on a rejection of the present in favour of a mythical medieval golden age that we can literally hop, skip, and jump back into.

This utopian dream of a Merrie England was not one peculiar to Mellors or to Lawrence, however. Figures such as Cecil Sharp, Mary Neal, and Daisy Daking all played a part in the English folk revival that took hold in the early twentieth century.

As of course did Lawrence disciple and Kibbo Kift Gleemaster Rolf Gardiner. A far more controversial and politically extreme figure than Sharp, Gardiner illustrates how neo-paganism and attempts to rejuvenate the nation via folk cultural and faux spiritual activities such as morris dancing, nude calisthenics, and solstice worship can very quickly turn fascistic.

Gardiner believed that morris dancing, for example, was a form of magical ritual that connected the fourfold of earth, mortals, sky and gods. As - for some unexplained reason - female participation would disrupt the elemental energies at play, he insisted that morris dancing should be for men only. But not all men: only virile Englishmen and others of pure Nordic stock for whom it was an expression of their racial soul.

Little wonder then that by 1936 Gardiner was an open supporter of the Nazis and became a close friend to Walther Darré, a leading 'Blood and Soil' ideologist who served as the Reichsminister of Food and Agriculture from 1933 to 1942 in Hitler's Germany. Admittedly, during the war years and once the full horror of Nazism was exposed, Gardiner modified his unpleasant political views and his racist interpretations of folk culture.
But it was too little, too late - although that's not really the point of this post. Rather, the point of the post is this: David, you have more to worry about in being a morris man than how it might reflect on your masculinity or sexual orientation; Lawrence-loving activists and pagan folk practitioners can dance to a dangerous tune if they're not careful ...

Posted by Stephen Alexander at 17:28 No comments: