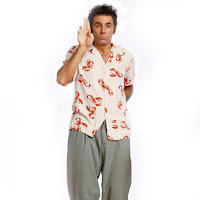 The surreal genius of Michael Richards as Cosmo Kramer in Seinfeld is not to everyone's taste. In fact, of the four central characters I find Kramer the least interesting and sympathetic. But I do like his comic hipster dress sense, including the short-sleeved white lobster shirt with red print.

I don't know from where the character drew his sartorial inspiration, but it's nice to think that this particular item is an hommage to the work of the great Spanish artist Salvador Dalí, who had a penchant for marine crustaceans with their hard protective shells and soft insides, particularly lobsters, which appear in several of his iconic works, including a dress made in collaboration with the Italian fashion designer Elsa Schiaparelli ...

If Coco Chanel ever had a serious rival, it was Elsa Schiaparelli - one of the most fabulous figures in fashion between the wars, whose designs displayed the influence of several prominent artists, including Dalí and Jean Cocteau, though it should be noted that her great inspiration and teacher was master couturier Paul Poiret.

Punk rockers may be amused to discover, for example, that it was Schiaparelli - and not McLaren and Westwood - who first made clothes with visible zips as a key element of the design. She also loved to experiment with synthetic materials, unusual buttons and outrageous decorative features. It was her designs produced in collaboration with Dalí, however, that remain amongst her best known, including the so-called Lobster Dress of 1937.*

As can be seen from the above photo, the dress was a relatively simple white silk evening dress with a crimson waistband and featuring a large lobster - painted by Dalí - on the skirt. Whilst not as amusing as his Lobster Telephone created the year before, the dress - famously worn by Wallis Simpson - is just as provocative I think, bringing surrealist elements of eroticism and cruelty into haute couture (for Dalí, lobsters invariably symbolised sex and suffering). **

* The three other works that came out of the Schiaparelli-Dalí collaboration are the Tears Dress (1938), a pale blue evening gown printed with rips and tears and worn with a long veil; the Skeleton Dress (1938), a black crêpe number which used trapunto quilting to create ribs, spine, and leg bones; and the Shoe Hat (1937-38), which, as one might guess, is a hat shaped like a high heeled shoe.

Posted by Stephen Alexander at 08:03 3 comments: