A Fond Farewell to Fenella Fielding 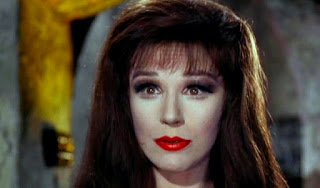 Fenella Fielding as the fiendishly beautiful Valeria
Carry On Screaming (1966)

It is again with sadness that I mark the passing of another wonderful comic actress - just days after the death of Liz Fraser - Fenella Fielding, star of my favourite Carry On film, Carry On Screaming (dir. Gerald Thomas, 1966).

The exotic-looking and exotic-sounding Fenella was born in Hackney, in 1927, to a Romanian mother and a Lithuanian father, with whom she had an unhappy (often physically violent) relationship. Spending much of her childhood in conversation with her dolls, she dreamed of becoming an artist and performer from an early age (much to the horror of her parents who hoped she would become a shorthand typist).

After eventually fleeing her awful home life, Fielding found herself in an amateur production at the LSE playing alongside Ron Moody, who encouraged her in her ambition to become a professional actress. Soon, she began appearing regularly in various reviews and by the end of the 1950s she had made something of a name for herself as a beautiful butterfly of comedy.

Throughout the following decade, Fenella was an established figure in Swinging London: Vidal Sassoon did her hair; Jeffrey Bernard took her clubbing; Francis Bacon and friends were all enchanted. She appeared on TV (in The Avengers, for example) and on film alongside male co-stars including Dirk Bogarde and Tony Curtis.

On stage, meanwhile, she pursued her real passion - drama. An accomplished and versatile actress, Fielding captivated audiences and critics alike with her interpretations of Ibsen, Shakespeare and Euripides. Noel Coward and Fellini both regarded themselves as fans of this highly intelligent and amusing woman who kept a copy of Plato by her bedside.

Of course, this aspect of her life and work has been fatally overshadowed by her role in Carry On Screaming. It is as smoking-hot Valeria wearing a fitted red velvet dress with plunging neckline, designed by Emma Selby-Walker, that she has entered the popular and pornographic imagination and will forever be remembered.

Serious performers and dramatists may not like it, but classical theatre, it appears, cannot compete with cinematic camp-vamp. And if the role of Valeria provided the kiss of death to Fielding's career, it also guaranteed her cinematic immortality.

I don't know if Fenella will be buried or cremated, but I kind of hope it's the latter, so she may smoke for one last time and the ghost of Orlando Watt might look on and cry: Frying tonight!


Note: those who are interested might like to click here to watch Fenella in her most famous scene as Valeria in Carry on Screaming, alongside the brilliant Harry H. Corbett as Detective Sgt. Bung.

Posted by Stephen Alexander at 16:27 No comments: