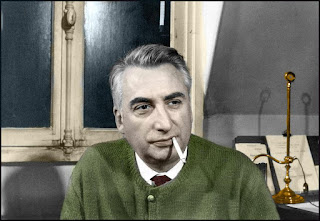 
I once wrote a little verse about how, like a lover at the graveside, I would often go into bookshops and gently straighten up the volumes of work by Roland Barthes assembled on the shelves; vainly hoping for one last word to be forthcoming; one previously unpublished text to magically appear.

Little did I realise at the time just how much material was in fact still to come; articles, essays, interviews, letters and lecture notes which had been available to a French audience ever since the expanded edition of Barthes's Oeuvres complètes, ed. Éric Marty, appeared in 2002 (Éditions du Seuil), but which remained relatively inaccessible and unknown to readers in the anglophonic world.

So I'm extremely grateful to Seagull Books who have just published the fifth and final volume in their Essays and Interviews series, drawn from the above, and translated (by Chris Turner) into English for the first time.

I strongly recommend to all readers of this blog that they buy, steal or borrow the following:

2. Roland Barthes, The Scandal of Marxism and Other Writings on Politics, trans. Chris Turner, (Seagull Books, 2015).

Those readers interested in my poem, 'In the Bookshop', can find it in Abraxas, Issue 3, ed. Christina Oakley Harrington and Robert Ansell, (Fulgur, 2013).

Those readers interested in a recent interview with Chris Turner in which he discusses his work translating Barthes and other French writers, including Baudrillard, should click here.

Posted by Stephen Alexander at 13:19 No comments: