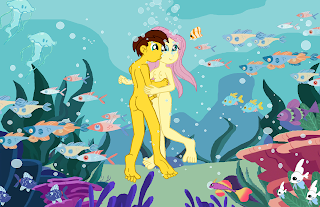 Aquaphilia is yet another form of sexual fetishism that we often come across in the work of Mr. D. H. Lawrence and I thought it might be interesting to examine several instances of his water-based eroticism here ...


I: The White Peacock

There's a very lovely scene in Lawrence's first novel in which Cyril and his friend George frolic naked in a pond ...

"The water was icily cold, and for a moment deprived me of my senses. When I began to swim, soon the water was buoyant, and I was sensible of nothing but the vigorous poetry of action. I saw George swimming on his back laughing at me, and in an instant I had flung myself like an impulse after him. The laughing face vanished as he swung over and fled, and I pursued the dark head and the ruddy neck. [...] As I came up to him and caught him, with my hand on his shoulder [...] George was floating just beside me, looking up and laughing."

This is already a fairly explicit piece of homoerotic and aquaphilic writing, but it's interesting to note the words deleted from the original MS at this point: "and his white breasts and his belly emerged like cool buds of a firm fleshed water flower" - a line that could only have come from Lawrence's pen.

Afterwards, having returned to the land, Cyril and George "stood and looked at each other as [they] rubbed [themselves] dry".

What's interesting about the case of Siegmund, the protagonist of Lawrence's second novel, The Trespasser, is how his aquaphilia takes on an autoerotic character and moves towards a becoming-fish ...

"He chose his bathing place [...] threw his clothes on a high rock [...] ran laughing over the sand to the sea, where he waded in, thrusting his legs noisily through the heavy green water.
It was cold, and he shrank. For a moment he found himself thigh-deep [...] afraid to plunge. Laughing, he went under the clear green water.
He was a poor swimmer. Sometimes a choppy wave swamped him, and he rose gasping, wringing the water from his eyes and nostrils, while he heaved and sank with the rocking of the waves that clasped his breast. Then he stooped again to resume his game with the sea. It is splendid to play, even at middle age, and the sea is a fine partner."

And if he did, in fact, choose to ejaculate his sperm upon the naked waters, mightn't this be said to mark his becoming one with his aquatic environment, just like a wave-thrilled fish?

Suddenly, in her penultimate term, Ursula Brangwen discovers that a "queer awareness existed between herself and her class-mistress, Miss Inger [...] a rather beautiful woman of twenty eight" who also happens to be the school's swimming instructress:

"Ursula trembled and was dazed with passion. Her hopes were soon to be realised. She would see Miss Inger in her bathing dress.
[...] In the great bath the water was glimmering pale emerald-green, a lovely, glimmering mass of colour within the whitish, marble-like confines. Overhead the light fell softly and the great green body of pure water moved under it as someone dived from the side.
Ursula, trembling, hardly able to contain herself, pulled off her clothes, put on her tight bathing suit, and opened the door of her cabin. Two girls were in the water. The mistress had not appeared. She waited. A door opened, Miss Inger came out, dressed in a red-tunic like a Greek girl's, tied round the waist, and a red silk handkerchief round her head. How lovely she looked. Her knees were so white and strong and proud, she was firm-bodied as Diana. She walked simply to the side of the bath, and with a negligent movement, flung herself in. For a moment Ursula watched the white, smooth, strong shoulders and the easy arms swimming. Then she too dived into the water.
Now, ah now she was swimming in the same water with her dear mistress. The girl moved her limbs voluptuously, and swam by herself, deliciously, yet with a craving of unsatisfaction. She wanted to touch the other, to touch her, to feel her."

Miss Inger invites Ursula to race her: and so the latter sets off in chase; just as Cyril chased George in The White Peacock:

"The mistress was just ahead, swimming with easy strokes. Ursula could see the head put back, the water flickering upon the white shoulders, the strong legs kicking shadowily. And she swam blinded with passion. Ah, the beauty of the firm, white, cool flesh! Ah, the wonderful firm limbs. If she could but hold them, hug them, press them between her own small breasts!"

"They neared the end of the bath - the deep end. Miss Inger touched the pipe, swung herself round, and caught Ursula round the waist, in the water, and held her for a moment against herself. The bodies of the two women touched, heaved against each other for a moment, then were separate."

Lawrence, however, can't resist giving us a further scene of aquatic lesbianism later in the same chapter ...

Miss Inger has invited Ursula to stay with her for the weekend at a country cottage and suggests a midnight swim. They undress in the bungalow, Ursula a little nervously. And then they venture outdoors, naked, feeling the "soft air of night upon their skins". Because Ursula is uncertain of the path, Miss Inger holds her close, and gives her a reassuring kiss.

Then, she picks up her student and volunteers to carry her into the water: "Ursula lay still in her mistress's arms, her forehead against the beloved, maddening breast." Before they can enter the water, however, a heavy shower of ice-cold rain begins to fall on their "flushed, hot limbs" and brings their aquaphilic adventure to a premature close.

Finally, I would like to draw attention to a scene in Chapter IV of my favourite novel by Lawrence, Women in Love, in which Gerald delights (solipsistically) in his own movement through water - and arouses the desire and envy of Gudrun in the process ...

"Suddenly, from the boat-house, a white figure ran out [...] It launched in a white arc through the air, there was a bursting of the water, and among the smooth ripples a swimmer was making out to space, in a centre of faintly heaving motion. The whole otherworld, wet and remote, he had to himself. He could move into the pure translucency of the grey, uncreated water.
Gudrun stood by the stone wall [...] watching the motion on the bosom of the water, as if fascinated. [...]
And she stood motionless gazing over the water at the face which washed up and down on the flood, as he swam steadily. From his separate element he saw [her], and he exulted to himself because of his own advantage, his possession of a world to himself. He was immune and perfect. He loved his own vigorous, thrusting motion, and the violent impulse of the very cold water against his limbs, buoying him up."

"Gerald suddenly turned, and was swimming away swiftly, with a side stroke. He was alone now, alone and immune in the middle of the waters, which he had all to himself. He exulted in his isolation in the new element, unquestioned and unconditioned. He was happy, thrusting with his legs and all his body, without bond or connection anywhere, just himself in the watery world.
Gudrun envied him almost painfully. Even this momentary possession of pure isolation and fluidity seemed to her so terribly desirable, that she felt herself as if damned, out there on the [dry land]."

Gudrun's aquaphilia, in other words, expresses itself not as a desire to fuck under water, but to shed her humanity and become-mermaid in her own weird, underwater world ...

I am also paraphrasing a line from Lawrence's magnificent poem 'Fish' in this section of the text, which can be found in Birds, Beasts and Flowers (1923). See The Poems, ed. Christopher Pollnitz, (Cambridge University Press, 2013), Vol. I, pp. 289-94.


This post is dedcated to Brenda Sumner, Secretary of the D. H. Lawrence Society, for all her kind help and support over the years.

Posted by Stephen Alexander at 08:20 No comments: