On Trolls and the Task of Philosophy 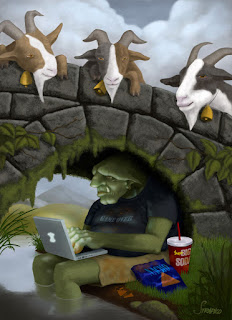 Originally, a troll was a type of grotesque-looking creature depicted within Norse mythology and Scandinavian folklore, often living in isolated caves or under old bridges and intent on causing harm to any human beings - or billy goats - who had the misfortune to encounter them.

But today, in online circles, a troll is a type of moron who likes to pick fights, disrupt on-topic discussion and insult people by posting often malicious, usually anonymous and nearly always extraneous comments, full of bigotry and wilful ignorance. Often claiming to represent the majority of ordinary decent folk, trolls pride themselves on their common sense and their plain-speaking.

Either way, it's advisable to avoid or ignore them and certainly not do anything to encourage their nastiness. Unfortunately, this isn't always possible. Sometimes, therefore, one is obliged to confront trolls. Indeed, if one is a philosopher, one has a certain ethical obligation to do so. For as Deleuze liked to remind his readers, the essential task of philosophy is to degrade stupidity and expose all forms of baseness of thought; to make these things shameful.

And so, if set upon by an ugly troll - perhaps disguised in the form of a squalid porcupine or an elderly badger (for trolls are excellent shape-shifters, changing form as easily and as often as they bend or break the rules governing intellectual exchange) - my advice is to stand your ground, like a philosopher.

And then shoot to kill - as much as one may dislike having to do so ...

Posted by Stephen Alexander at 14:32 No comments: