The Ballerina is Not a Girl Dancing 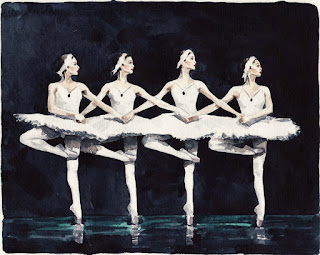 In a late prose piece, Mallarmé makes the provocative claim that "the ballerina is not a girl dancing".

Indeed, according to Mallarmé, she's not even a girl, but a living metaphor; symbolising "some elemental aspect of earthly form", such as a flower or a swan.

And she doesn't dance so much as use her body - "with miraculous lunges and abbreviations" - to produce and perform a special kind of condensed writing whose ties to a metaphysically stable world of referents have been snapped: une écriture corporelle.

Thus, whilst not quite one and the same thing, ballet and poetry are semiotically entwined; they are both formalised and ritualised aesthetic sign systems, designating truth that is plural and uncertain.

And this is why Nietzsche loved both art forms and not only held great poets such as Goethe and Heinrich Heine in the highest regard, but blessed the feet and fair ankles of sweet girls who, in dancing, transcend their gender and humanity and bring meaning to a crisis.

Posted by Stephen Alexander at 17:33 No comments:

Postmodern Approaches to Literature 1: The Death of the Author

Just as Nietzsche's tragic proclamation concerning the death of God opened a new horizon for thought, so too does the death of the Author announced by Roland Barthes allow an experimental and joyous movement to be made from work to text and for the emergence of a new type of reading pleasure: jouissance.

Traditionally, the Author is seen as a central and all-important figure; in his person resides the very origin of the work and its ultimate truth. The Word belongs to him and he is the Word. Thus, as the Author, he can claim authorship of and authority over a text and its meaning. Readers who wish to give an authentic reading are obliged to know his intention and never allow their own interpretations to stray too far from this. The Author is the father of the text and readers, like children, should be seen to be obediently reading - not heard voicing their own opinions (which would be impertinent), or exposing their behinds in an act of comic defiance (which would be rebellious).

But for Barthes, to tie reading and criticism to the figure of the Author is not only lazy in its convenience, it's slavish in its wilful and passive surrender to authority. To assign an Author to a text is not only to impose a limit on the latter, but on ourselves. Thus to call for (and to celebrate) the death of Author is, like deicide or the beheading of the king, an act of political resistance to tyranny (although the naive belief that we might fully liberate the text and ourselves from power is one that Foucault makes us rightly suspicious of).

This death - and the subsequent move from work to text - allows for the birth of the reader as the source of meaning and the subject of desire. This really rather simple but very beautiful and important idea remains, almost fifty years on, very seductive. For writing (and reading in a writerly manner) cannot commence until this death has taken place. Writing is thus a posthumous activity.

And posthumous writing is also postmodern in the sense that the Author is very much a modern figure, developing, as Barthes argues, out of English empiricism, French rationalism and the unique value afforded the bourgeois individual. Within modern culture, the Author takes on greater and greater importance until, finally, he assumes total control over his work and we are no longer allowed to listen to language, but only to the monotonous voice of the Author confiding in us about "his person, his life, his tastes, his passions".

For Barthes, it was the poet Mallarmé who was one of the first to understand "the necessity to substitute language itself for the person who until then had been supposed to be its owner" and to restore to writing its impersonality - which is to restore also the status (and the pleasure) of the reader. This process of calling into question and ridiculing the authority of the Author continued in the work of Valéry, Proust, and the Surrealists.

However, it was linguistics which provided those interested in disposing of the Author "with a valuable analytical tool by showing that the whole of the enunciation is an empty process, functioning perfectly without there being any need for it to be filled with the person of the interlocutors". Barthes continues:

"Linguistically, the Author is never more than the instance writing, just as I is nothing other than the instance saying I: language knows a 'subject', not a 'person', and this subject, empty outside of the very enunciation which defines it, suffices to make language 'hold together', suffices, that is to say, to exhaust it."

Acknowledging this, not only frees the reader and the text, but it also liberates the scriptor (Barthes's term for the writer who emerges after the death of the Author). The scriptor is not the father of the book, but a child of language; that is to say, he is not the past of his own work, but rather "born simultaneously with the text" in the immediacy of the present and is not "equipped with a being preceding or exceeding the writing".

Thus a postmodern approach to literature allows for a different understanding of time or temporality; one primarily concerned with the nowness of the moment and what Nietzsche designates as its eternal recurrence. And it means we have moved beyond the idea of literature as a form of representation. Instead, writing now designates a performative practice "in which the enunciation has no other content (contains no other proposition) than the act by which it is uttered".

Emphasizing the material nature of writing as marks on a surface and the physical aspect of a hand that dances with a pen across a piece of paper, Barthes both echoes and anticipates Derrida. He writes:

"Having buried the Author, the modern scriptor can thus no longer believe ... that this hand is too slow for his thought or passion and that consequently ... he must emphasize this delay and indefinitely 'polish' his form. For him, on the contrary, the hand, cut off from any voice, borne by a pure gesture of inscription (and not of expression), traces a field without origin – or which, at least, has no other origin than language itself, language which calls into question all origins."

Barthes also echoes and anticipates the work of Julia Kristeva and her key concept of intertextuality, writing:

"We know now that a text is not a line of words releasing a single 'theological' meaning (the 'message' of the Author-God) but a multi-dimensional space in which a variety of writings, none of them original, blend and clash. The text is a tissue of quotations drawn from the innumerable centres of culture."

This notion of the text as intertext, obviously helps to further erode the old idea of literature as either representative of a non-linguistic reality, or expressive of the author's original ideas or unique being. The scriptor understands that he or she can only play with and within the field of language and "only imitate a gesture" that is pre-given and pre-rehearsed. They ought also to realise that they essentially work with a "ready-formed dictionary, its words only explainable through other words".

Barthes concludes his crucial essay in a series of passages worth quoting at some length:

"Succeeding the Author, the scriptor no longer bears within him passions, humours, feelings, impressions, but rather this immense dictionary from which he draws a writing that can know no halt: life never does more than imitate the book, and the book itself is only a tissue of signs, an imitation that is lost, infinitely deferred."

"Once the Author is removed, the claim to decipher a text becomes quite futile. To give a text an Author is to impose a limit on that text, to furnish it with a final signified, to close the writing. Such a conception suits criticism very well, the latter then allotting itself the important task of discovering the Author ... beneath the work: when the Author has been found, the text is 'explained' - victory to the critic. Hence there is no surprise in the fact that, historically, the reign of the Author has also been that of the Critic, nor again in the fact that criticism ... is today undermined along with the Author. In the multiplicity of writing, everything is to be disentangled, nothing deciphered; the structure can be followed, 'run' (like the thread of a stocking) at every point and at every level, but there is nothing beneath: the space of writing is to be ranged over, not pierced; writing ceaselessly posits meaning ceaselessly to evaporate it, carrying out a systematic exemption of meaning. In precisely this way literature (it would be better from now on to say writing), by refusing to assign a ‘secret’, an ultimate meaning, to the text (and to the world as text), liberates what may be called an anti-theological activity, an activity that is truly revolutionary since to refuse to fix meaning is, in the end, to refuse God and his hypostases – reason, science, law."

"Thus is revealed the total existence of writing: a text is made of multiple writings, drawn from many cultures and entering into mutual relations of dialogue, parody, contestation, but there is one place where this multiplicity is focused and that place is the reader, not, as was hitherto said, the author. The reader is the space on which all the quotations that make up a writing are inscribed without any of them being lost; a text's unity lies not in its origin but in its destination. Yet this destination cannot any longer be personal: the reader is without history, biography, psychology; he is simply that someone who holds together in a single field all the traces by which the text is constituted."

We see how Barthes disentangles a text and runs threads of meaning in his fetishistically detailed structural analysis of Balzac's novella Sarrasine. In S/Z, Barthes demonstrates how even what might appear to be a conventional readerly work written by a classical author can become a renewed source of perverse pleasure once it has been read in a writerly manner and transformed into a complex and ambiguous text.

I’ll say more about this movement from work to text (and the resulting pleasure of the text) in Part II of this post.


See: Roland Barthes, ‘The Death of the Author’, in Image Music Text, trans. Stephen Heath (Fontana Press, 1977), pp. 142-48. All lines and passages quoted are taken from this essay.

Posted by Stephen Alexander at 02:30 No comments: