Flogging a Dead Horse (Notes on The Rocking Horse Winner) 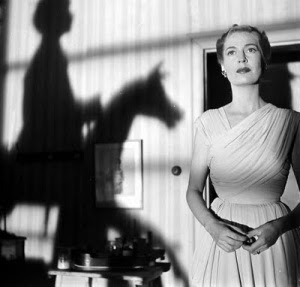 Still from The Rocking Horse Winner (dir. Anthony Pelissier, 1949),
showing Valerie Hobson as Hester Grahame and the shadow of John Howard Davies
as her son Paul upon his magical wooden steed


Having just re-read it, I was hoping to write something provocative on 'The Rocking Horse Winner', Lawrence's short story first published in the American fashion magazine Harper's Bazaar, in July 1926.

But, unfortunately, I've so far failed to even get out of the starting gate. Indeed, I'm rapidly coming to the conclusion that anyone attempting a new interpretation is likely to find themselves flogging a dead horse. For between them, the Freudian, Marxist, and Christian critics have done an effective job of foreclosing the text; they've nobbled it, so to speak.

For Marxists - less interested in sex and the libidinal unconscious and more concerned with class and the role of cash within a commodity theory of exchange - and for Christians - convinced that the love of money is the root of all evil - the tale is also very straightforward and easy to explain. For the former, capitalism dissolves the human bonds that tie us together; for the latter, all forms of materialism lead to sin.

I would like to find and to offer something more; something, for example, that allows us to relocate desire from the nursery and free it from its entrapment within the Oedipal triangle of Mummy-Daddy-Me; or something that allows us to conclude other than that greed is bad, luck is vulgar, and there's merely shit in the hearts of the bourgeoisie.

But Lawrence, who at other times goes out of his way to prove himself anti-Freudian, anti-Bolshevist, and anti-Christian, gives us so little else to work or play with in this story. He's so unambiguously opposed to wealth, success, and even good fortune - not to mention so openly contemptuous of Hester - that he can't help producing a tale that virtue signals its sympathies and its prejudices too clearly, too crudely (as, arguably, he does in much of his later fiction - including his notorious last novel).


See: D. H. Lawrence, 'The Rocking Horse Winner', in The Woman Who Rode away and Other Stories, ed. Dieter Mehl and Christa Jansohn, (Cambridge University Press, 1995).

Posted by Stephen Alexander at 07:59 3 comments: