Decorating the World with David Bromley 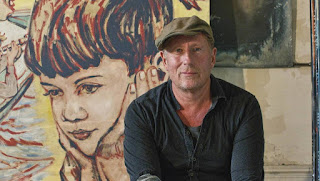 Anglo-Aussie artist David Bromley, who is best known for his images of youngsters that nostalgically recreate a memory (or fantasy) of a Boy's Own childhood and decorative female nudes painted in black outline with clever colour combinations that also make one long for the past, is certainly not without his critics.

And no doubt some of the criticism is fair. But, in so far as this criticism relates to his production techniques and the manner in which he has successfully branded himself and his work ensuring mass commercial appeal, much of it seems laughably passé; this is, after all, not only a post-Warhol world, but an age in which Banksy, Hirst and Koons all operate as artist-celebrities.


To suggest, as Peter Drew suggests, that by proliferating images on an industrial scale Bromley dilutes the meaning and substance of his work, is to return to hoary old notions of originality and artistic aura (the latter being a magical quality said to arise from a work's uniqueness and which cannot possibly be reproduced).

I mean, I love Benjamin as much as the next man, but c'mon ... 1936 is a long time ago and the myth of presence - which this idea of aura clearly perpetuates - is something that Derrida has, one might have hoped, put to bed once and for all.


And Drew's assertion that all great art is a form of self-expression, is also one that deserves to be met with scorn. The last thing I want to see revealed on a canvas is subjective slime; I really don't give a shit about the artist's feelings, or care about the condition of their immortal soul.

Ultimately, even if Bromley is simply in it for the money, then, that's his business and his choice. But I like his tots and tits - not to mention his use of flowers, birds and butterflies - and he has, after all, six kids to support.

One suspects, however, that Bromley is actually a more interesting figure than this and I rather admire his attempt to take art outside of the usual gallery network and into a more public arena, weaving his images into the fabric of everyday life and contemporary culture. 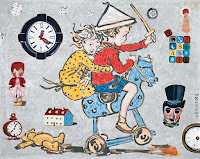 Posted by Stephen Alexander at 17:54 No comments: