In Memory of The Woman Who Rode Away 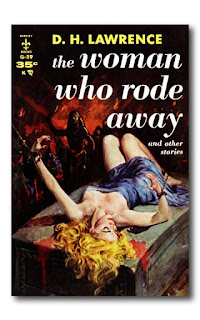 Kate Millett famously condemns 'The Woman Who Rode Away' as an insane pornographic fantasy - which, in some ways, it is.

But even if there's something a little lurid and misogynistic about it at times, we can do without the kind of psycho-sexual analysis which suggests that all Lawrence's writing is animated by an unconscious element of voyeurism and sado-masochistic relish.

Charges such as this ignore the fact that, in Mexico, Lawrence discovered a religious sensibility which threatened to extinguish all that he was too. And so the tale is not merely about the drugging and murder of a desperate housewife in search of adventure. Rather, it makes a sacrifice of white-faced modernity itself, even as it mocks the romantic idealism of those renegades who turn against their own race, culture, and historical experience and seek out an impossible return to the primitive.

Of course, as one critic points out, it's never easy to "disentangle the patterns of primitive religious ritual ... from those of the kind of sexual titillation which depends on the dehumanization of its object".* But we're obliged as readers of Lawrence to at least try ...

At the heart of all religious practice and belief - I'd suggest - lies an almost fetishistic obsession with death. This becomes most apparent in sacrificial rites which are not only often elaborate, but extraordinarily cruel in character and designed to reveal the flesh, to mark the flesh, and, ultimately, to consume the flesh.

And, let’s be clear, when I speak of the consumption of the flesh, I mean this literally; human sacrifice very often involves cannibalism. If the victim isn't quite viewed as butchers' meat, nevertheless he or she is frequently feasted upon.

Now, whilst we may find the desire to cannibalise one another completely alien, it's worth remembering that even the Christian communion involves the eating of flesh and drinking of blood: Christ is sacrificed and ritually consumed by his followers. Indeed, the conquistadors, who provided many of the accounts we have of Aztec practices, were both thrilled and horrified to note how such a savage and cruel religion presented many points of analogy to the doctrine and ritual of their own faith.

The key, however, to all acts of sacrifice, is that they allow us as mortal or discontinuous beings to experience a sense of life's inhuman never-endingness; that is to say, via the death of an individual, the continuity of existence is confirmed. Christianity is fundamentally mistaken not in sacrificing its central protagonist, but in denying us the pleasure of this death.

One of the things Lawrence does in 'The Woman Who Rode Away', is give readers license to imaginatively exercise in good conscience those drives which direct us towards carnal pleasure, including the forbidden pleasure of anthropophagy.

So, yes, it’s true that the woman who rode away is abused and victimized - and yes it's disingenuous to speak of her having submitted voluntarily to the above - but any sensational aspects should not obscure the story's religious dimension; in fact, they fully belong to it. Further, it should be remembered that within pagan religious culture the fatal element within eroticism was acutely felt and fully justified linking sex with sacrifice.

Thus, rather than try to disguise our discomfort as readers or mistakenly call for censorship, we should accept it. Anguish is one of the great religious feelings and has always accompanied human sacrifice. Bataille reminds us that within Aztec society anyone who couldn't bear to see victims being led to their deaths and allowed their anguish to collapse into pity, would be subject to punishments. Young and old alike were expected to stare death in the face and to share in the tragedy and horror of life.

In sum: I understand (and share) feminist concerns with works that portray women being raped, tortured, murdered or, in this case, ritually sacrificed - but isn’t it refreshing to think that female blood can also have redemptive power?

Besides, whilst the woman who rode away is passive in comparison to the priest who actively wields the knife, the latter too ultimately loses himself in the ritual (just as in the act of love). The ritual of sacrifice destroys the self-contained character of all participants (just as coition leaves both parties fucked). In a crucial passage, Bataille writes:

"In sacrifice, the victim is divested not only of clothes but of life … the victim dies and the spectators share in what [her] death reveals. This is what religious historians call the element of sacredness. This sacredness is the revelation of continuity through the death of a discontinuous being to those who watch it as a solemn rite. A violent death disrupts the creature's discontinuity; what remains, what the tense onlookers experience in the succeeding silence, is the continuity of all existence with which the victim is now one.”

The woman who rode away seeks this oneness; she is tired of living out of touch. In death, she achieves her freedom and fulfilment and she shares this with those who witness her death. Only a violent death which is carried out as a solemn and collective religious act has the power to allow men and women to experience immortality and live the life of the stars and the gods.

Or, as Bataille puts it, "divine continuity is linked with the transgression of the law on which the order of discontinuous beings is built" - namely, the commandment not to kill. Human sacrifice brings life and death into harmony, opening the former onto the latter whilst simultaneously transforming the latter into something paradoxically vital.

But this is not, of course, an argument for dusting off the obsidian knife and even Lawrence, thankfully, rejects violent, authoritarian theocratic culture at last and questions those writers who remain obsessed with the transgression of limits and only palpitate to thoughts of murder, suicide and rape ...

D. H. Lawrence, The Woman Who Rode Away and Other Stories, ed. Dieter Mehl and Christa Jansohn, (Cambridge University Press, 1995). *Note: The Penguin edition of this text (1996) has an introduction by Neil Reeve and he's the critic I'm quoting here.

Posted by Stephen Alexander at 13:01 No comments: