On the Woman in Hitler's Bathtub 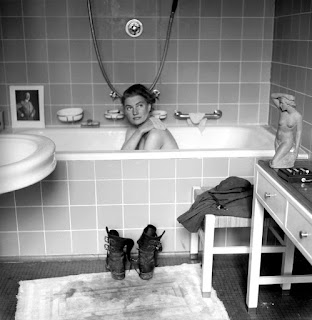 
Bathing scenes - particularly bathing scenes featuring an attractive young woman, nymph, or goddess - have a long history within the world of fine art. Like King David, we can all easily call to mind the image of Bathsheba at her toilette thanks to Rembrandt. And, thanks to François Boucher, we don't have merely to dream of Diana naked and displaying her divine attributes.

Throughout the 19th century, the western pornographic imagination took on an increasingly exotic character and there were thousands of canvases produced depicting life inside the harem, or steam-filled Turkish bath. More modern artists, however, such as Degas, rejected the pretext of mythology or orientalism and preferred to paint contemporary bathers splashing about or towelling off (as if spied through a keyhole, as he voyeuristically confessed).

The genre remained popular in avant-garde circles at the beginning of the 20th century too. Indeed, the pop artist Roy Lichtenstein was still referencing the subject and making his distinctive contribution to it in 1963. There's just something irresistible, it seems, about the combination of girls, soap, and running water ...

For me, however, the most powerful of all bathing images is one that does far more than affirm the slippery appeal of wet flesh. It's a photo of Lee Miller in Hitler's bathtub, taken at the Führer's Munich apartment in April 1945 (just 24 hours before he blew his brains out in Berlin).

Miller, an American fashion model who travelled to Paris in 1929 in order to become a photographer and hang out with the Surrealists, was one of only a tiny handful of female correspondents working alongside the Allied forces in Europe during the War. Attached to the 83rd Infantry Division of the US Army, Miller was in the thick of the action whilst recording events for the readers of Vogue: she was there when they landed on the beaches of Normandy; she was there as they entered Paris; and she was there, camera in hand, when they liberated Buchenwald and Dachau concentration camps.

Despite her distress, Miller nevertheless photographed survivors and photographed also the mounds of decomposing bodies piled up of those enemies of the Third Reich who didn't survive, but died from disease, malnourishment, brutal mistreatment and/or the Nazi policy of extermination through labour.

After leaving Dachau, which was situated ten miles northwest of Munich, Miller accompanied GIs into the Bavarian capital, where they discovered Hitler's apartment. Always one to seize (and to stage) a unique photo opportunity, Miller stripped off and had herself pictured by fellow photographer David Scherman naked in the German leader's bath.

It remains a striking and unsettling image; the culmination of her work as a surrealist and photojournalist, combining humour and political defiance. Miller and Scherman deliberately placed the Heinrich Hoffmann portrait of Hitler on the tub as an amusing indicator of just where she was. They also just as deliberately placed the small sculpture by Rudolf Kaesbach in the bathroom in order to pass critical judgement on the Führer's kitsch-classical (nicht entarteten) taste in art.

And, finally - most crucially - in front of the tub, Miller set down her heavy boots covered with the filth from Dachau earlier that day; filth she has trodden with contempt into Hitler's pristine white bathmat. In this way, a beauty in the bathtub achieves her victory over a beast in the bunker ...

It would be nice to conclude this post with the thought that she who laughs last laughs the longest and that this iconic photo represents the idealistic triumph of aesthetics and humanity over fascist ideology. But, sadly, it would be somewhat disingenuous.

For it's not so easy to forget traumatic experiences or erase horrific memories and so, long after the War, images from the camps - many of which she destroyed or hid away - continued to haunt Miller and she suffered from severe episodes of clinical depression, eventually giving up the darkroom in favour of the kitchen.

No poetry after Auschwitz - and maybe no photography either - but there's always cookery ...

Posted by Stephen Alexander at 19:19 No comments: