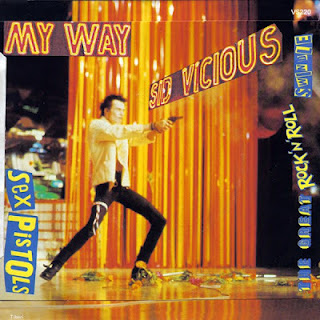 For many people, the most memorable scene in The Great Rock 'n' Roll Swindle is the one in which Sid Vicious gives his own unique interpretation of that sentimental slice of cheese made famous by Sinatra: My Way.

Whatever one might think of him, there's no denying that the 20 year-old Sex Pistol gives an astonishing performance and embodies a look and a moment of punk perfection on stage at the Olympia, Paris.

Indeed, even Paul Anka, who wrote the song - adapted from on an earlier release by Claude François and Jacques Revaux - conceded in an interview thirty years later that whilst he had been somewhat destabilized by Sid's version, he nevertheless admired the sincerity of the performance.

And French pop's greatest poet and pervert, Serge Gainsbourg, who witnessed Sid's finest few minutes on stage, was so smitten that - according to Malcolm - he thereafter kept a picture of him on his piano, alongside that of Chopin.

Whether that's true or not, I don't know. And whether Sid ever did anything his way is, of course, highly debatable; philosophically speaking, the very idea of free will determining an individual's actions seems dubious.

One suspects that had it been his decision, Sid would have covered a Ramones track and that the choice of this particular number was therefore McLaren's. Still, it was a good choice - and a fateful choice; for Vicious and his girlfriend Nancy Spungen, the end really was near ...

Note: Sid's firing of a gun blindly into the audience at the end of the song is a nod towards André Breton's idea of what constitutes the simplest act of Surrealism and is evidence of how the artistic and philosophical roots of the Sex Pistols lay in Paris as much as London and New York.

For a related post to this one on Sid's Parisian adventures in 1978 as a kind of punk flâneur, click here.

Posted by Stephen Alexander at 14:56 No comments: