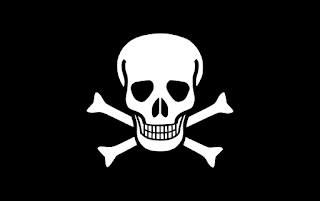 As Michael Squires reminds us, A Propos of "Lady Chatterley's Lover" originally consisted of a brief expository essay in which Lawrence takes on the pirates who had moved quickly to produce various counterfeit editions of his controversial novel, which had been published privately, in July 1928.

Later, Lawrence radically expanded the essay in order to defend the work from critics and censors - whom he despised more than the pirates - and offer a "final, eloquent statement of his belief" [1] in an authentic model of sexuality and the importance of what he termed phallic marriage.

I'll comment on these ideas shortly, but I'd like to begin by discussing Lawrence's skirmish with Jolly Roger ...

Towards the end of 1928, Lawrence became aware that Lady C. had been pirated, as unauthorised versions of the work began appearing in New York, London, and Paris, much to his irritation.

He decided the best thing to do as a countermeasure would be to bring out a new, inexpensive paperbound edition of his own. This French edition, which came with the original short introduction mentioned above ('My Skirmish with Jolly Roger') - appeared in May 1929 and quickly sold out.

But what, we might ask - apart from the loss of royalties (and Lawrence wasn't indifferent to this issue) - was his problem with the pirate books?
In A Propos, he objects at first purely on aesthetic grounds; they are either cheap and inferior or gloomy and depressing looking. But that's rather unconvincing coming from someone who, just five years earlier, had written of his contempt for the "actual corpus and substance" of the book as an actual object; i.e., as a published volume that is marketed and put on sale:

So there's obviously something else going on ... And that something else is to do with the question of authenticity: In brief, Lawrence hates the pirate books because they're forgeries and facsimiles. In other words, they're not the real deal as authorised (and signed) by him; they're counterfeit copies, or replicas as he calls them.


And that's what troubles him: just as, later in A Propos, it becomes clear what troubles him most of all about modern expressions of sexuality and human emotion is that they are, in his view, fake and fraudulent. Lawrence contrasts emotions as (false) mental representations with real feelings that belong to the body:

"Today, many people live and die without having had any real feelings - though they have had a 'rich emotional life' apparently, having showed strong mental feeling. But it is all counterfeit." [3]

Above all else, it's love that is a counterfeit feeling today and reduced to a stereotyped set of behaviours. Which means, says Lawrence, that there is no real sex - it's been killed, or, at the very least, perverted into a thing that is cold and bloodless. And that's a catastrophe because, for Lawrence, sex is an impersonal, cosmic principle that not only keeps men and women in balance, but holds the very heavens in place.

Personally, I can only echo Michel Foucault who ends the first volume of his History of Sexuality with a quotation from Lawrence's A Propos calling for the "full conscious realisation of sex" (i.e. sex thought completely, honestly and cleanly). [3]

Foucault responds to this passage, in which Lawrence would have us believe our ontological future is at stake, with amused irony:

"Perhaps one day people will wonder at this. They will not be able to understand how a civilization [...] found the time and the infinite patience to inquire so anxiously concerning the actual state of sex; people will smile perhaps when they recall that here were men - meaning ourselves - who believed that therein resided a truth every bit as precious as the one they had already demanded from the earth, the stars, and the pure forms of their thought ..." [4]

See also: Chris Forster, 'Skirmishing with Jolly Roger: D. H. Lawrence, Obscenity, and Book Piracy', Ch. 3 of Filthy Material: Modernism and the Media of Obscenity, (Oxford University Press, 2018), pp. 61-88. Forster cleverly - and, in my view, rightly - argues that Lawrence "frames his critique of piracy as one more expression of the corrupt state of [inauthentic] modernity" [71]

Musical bonus: Adam and the Ants, 'Jolly Roger', from the album Kings of the Wild Frontier (CBS, 1980): click here.

Posted by Stephen Alexander at 17:59 No comments: