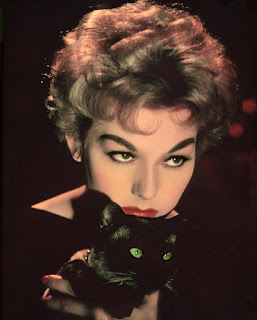 Kim Novak as Gillian Holroyd
(with Pyewacket the Cat)


My three favourite witches are not the Wayward Sisters found in Shakespeare's Macbeth, dressed in filthy robes, performing weird rituals in the fog, prophesying doom, etc. Nor are they the cock-starved, devil-invoking trio of Alex, Jane and Sukie given us by John Updike in his 1984 novel, The Witches of Eastwick.

Rather, the three broomstick-riding women I find most spellbinding are Jennifer, Gillian and Samantha ...

The second of these, Gillian Holroyd, the free-spirited, Greenwich Village witch with a penchant for going barefoot, was played by Kim Novak in the 1958 romantic comedy Bell, Book and Candle (dir. Richard Quine). The male lead in the film was taken by James Stewart, playing Shep Henderson, the handsome (but much older) next door neighbour upon whom Gillian casts a love spell.

Unfortunately, things backfire and she eventually falls in love with Shep; problematic for a witch as this (apparently) means the loss of her magical powers. However, rather like Jennifer in I Married a Witch (1942), played by Veronica Lake, Gillian decides this is a price worth paying; that love is stronger than witchcraft - or, at any rate, more valuable, more vital. She chooses fulfilment as a married woman, over the lonely and frustrated life of a spinster-witch.

Interestingly however, her feline familiar, Pyewacket, is unimpressed with this caving in and conforming to a conventional mix of romantic idealism and sexism; when Gillian opts for love, he puts his nose in the air, turns tail, and leaves her to her new, all-too-human life.

Novak is an interesting woman: of Czech descent, she began as a model before establishing a career as an actress. Studio bosses initially hoped that she would be a new Rita Hayworth or Marilyn Monroe, but Novak had no interest in being typecast. Indeed, despite her success, by the mid-1960s she was fed-up with the Hollywood lifestyle. Rarely acting after 1966 (and preferring TV projects to cinematic ones), Novak chose to concentrate on her first love, the visual arts, often writing poetry to accompany her pictures.

Now in her eighties, she continues to create work as a photographer, poet and painter. But it's as a seductive (slightly scary) on-screen witch, humming that infernal tune and stroking her pussy, that I, like many wiccaphiles, most fondly think of her.

Posted by Stephen Alexander at 08:34 No comments: 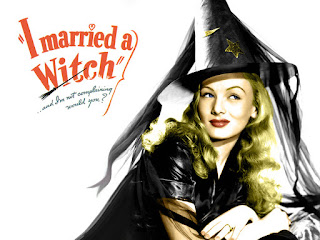 
My three favourite witches are not the Wayward Sisters found in Shakespeare's Macbeth, dressed in filthy robes, performing weird rituals in the fog, prophesying doom, etc. Nor are they the cock-starved, devil-invoking trio of Alex, Jane and Sukie given us by John Updike in his 1984 novel, The Witches of Eastwick.

Rather, the three broomstick-riding women I find most spellbinding are Jennifer, Gillian and Samantha ...

The first of these, Jennifer, was played by Veronica Lake in the 1942 romantic comedy I Married a Witch (dir. René Clair). The tagline for the theatrical poster declares: NO MAN CAN RESIST HER! and I suspect that's true, both of the character and the actress playing her; the much-loved peek-a-boo girl whose hairstyle was much copied by young women in the early 1940s.

Lake is often best remembered for her performances alongside Alan Ladd in movies such as The Blue Dahlia (1946), a classic example of what came to be known critically as film noir. But Lake was never comfortable being cast as a femme fatale and was a very reluctant sex symbol. Indeed, she became so disillusioned with the movie business and the way it turned people into what she termed zombies, that she quit Hollywood in 1951.

So, partly as a mark of respect to this intelligent and talented woman, I prefer to recall her playfully camping it up as mistress Jennifer and teasing the hapless Wooley, played by the much older, distinguished star of stage and screen, Fredric March (whom Lake described as a pompous poseur after he dismissed her as a bimbo void of any acting ability in remarks prior to production).

I Married a Witch is such a joyful, fun film; one that always makes wiccaphiles happy. And it comes with a moral lesson that even D. H. Lawrence - who hated witches - might endorse: Love is stronger than witchcraft.

Posted by Stephen Alexander at 19:34 No comments: