Collaboration Horizontale (With Reference to the Case of Arletty) 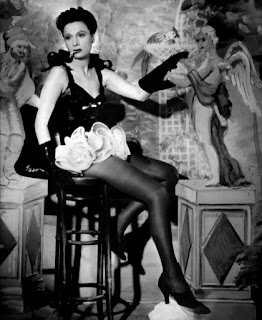 Sleeping with the enemy or, as the French like to call it, collaboration horizontale, is invariably a problem when a country is under foreign occupation.

For despite all the horrors of war, romantic relationships and brief sexual encounters are bound to occur between naturally flirtatious young women obliged to think with their hips during desperate times and young soldiers flushed with victory, but feeling lonely and a long way from home - particularly if the latter happen to be highly cultured German officers, such as Hans Jürgen Soehring, with their stylish uniforms and impeccable manners.

As Elaine Benes would say, they're just so good looking ...

Thus, I can entirely sympathise with those thousands of women throughout France who collaborated in this manner and think the public humiliation and violence they were subject to after the War, at the hands of their own countrymen, despicable and deplorable.*

Women, such as Léonie Marie Julie Bathiat, the actress, singer, and fashion model known professionally as Arletty (adapted from the name of a character in a story by Guy de Maupassant). For she too was found guilty of having an affair with a German officer during the Occupation, officially branded a traitor, and imprisoned for 18 months (the authorities believing they had to make an example of her).

I'm delighted to note, however, that rather than regret her illicit liason and apologise, Arletty told those who judged her: My heart is French, but my arse is international!


*Note: Heaven knows I'm not a Christian, but on this point I'm with Jesus: Let he who is without sin shave the first head and judge not, lest ye be judged. It's never honourable to act with vengeance, spite, or malice in one's heart.

Posted by Stephen Alexander at 07:14 No comments: