Tickets Please (On the Buses with D. H. Lawrence) 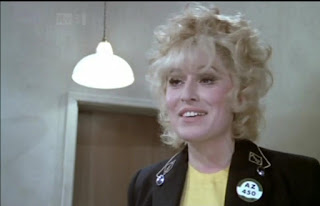 Pat Ashton as überclippie in the ITV comedy On the Buses

Literary scholar Brian Finney cleverly identifies a loose classical parallel between Lawrence’s short story ‘Tickets Please’ and Euripides’s play, The Bacchae. But as one who wasn’t reared on ancient Greek tragedy but, rather, on 1970s British sitcoms, I have to admit that, when recently re-reading the tale, the thing that immediately came to my mind was On the Buses.

It’s not only that inspector John Thomas (or Coddy) resembles a cross between Stephen Lewis’s Blakey (sporting the same toothbrush moustache and peaked cap) and the sex-mad driver, Jack, played by Bob Grant; it’s that the girl conductors as described by Lawrence sound just like the buxom blonde clippies personified by Pat Ashton: sharp-tongued, fearless young hussies in ugly blue uniforms, with skirts up to their knees (and beyond).*

However, whereas On the Buses was often crude and vulgar, it doesn’t really belong to the pornographic imagination; it lacks the perverse aesthetic and sadomasochistic elements that crucially define the latter. Lawrence, of course, understands these elements all too well; understands them, and gleefully exploits them in his fiction.

Thus, ‘Tickets Please’ doesn’t end in bawdy farce, but eroticised violence. In a scene that Eric Stanton might have sketched, Lawrence has John Thomas get his comeuppance at the hands of half-dozen girls whom he’s recently fucked round with: Annie, Cissy, Laura, Muriel, Polly and last, but by no means least, the rather pale, but well-built and vindictive Nora.

Having lured the crumpet-loving Coddy into their staff room at the depot, the clippies give him some tea served with bread and dripping. They tease him, gently at first, then more aggressively; demanding that he choose one of them – and only one – to walk home with. He tries to laugh things off, but he’s rightly uneasy and mistrustful as they make him stand with his face to a wall, tittering excitedly behind his back:

“And suddenly, with a movement like a swift cat, Annie went forward and fetched him a box on the side of the head that sent his cap flying and himself staggering. He started round.
But at Annie’s signal they all flew at him, slapping him, pinching him, pulling his hair, though more in fun than in spite or anger. He however saw red. His blue eyes flamed with strange fear as well as fury, and he butted through the girls to the door. It was locked. He wrenched at it. Roused, alert, the girls stood round and looked at him. He faced them, at bay. At that moment they were rather horrifying to him, as they stood in their short uniforms. He was distinctly afraid.”

John Thomas demands that they unlock the door and let him go. But things turn nastier when Annie takes off her belt and, swinging it, fetches him a “sharp blow over the head, with the buckle end”. He grabs her to try and prevent another blow, but “immediately the other girls rushed upon him, pulling and tearing and beating him” like strange, wild creatures determined to have their sport and their revenge:

“Nora had hold at the back of his collar, and was actually strangling him. Luckily the button burst. He struggled in a wild frenzy of fury and terror, almost mad terror. His tunic was simply torn off his back, his shirt-sleeves were torn away, his arms were naked.”

Finally, they get him down and then they kneel on him, with flushed faces and wild hair; their eyes glittering strangely. John Thomas lies still, beaten and at the mercy of the young women. His face was scratched and bleeding. The sight of his white, bare arms excited the girls. Polly is part hysterical, part ecstatic; when not laughing, she gives long groans and sighs. Annie slaps John Thomas and again commands him to choose one of them. And so, finally, he chooses her.

This brings the attack and the story to a close, if something of a ruined climax; for nothing is consummated. The girls let him up and then stand about uneasily, “flushed, panting, tidying their hair and their dress unconsciously”, as the bruised and battered Coddy picks up his torn clothes and absurdly puts his cap back on in a vain attempt to regain his lost authority.

As the song says: There's always gay life on the buses / You'll find it thrilling when you ride / And you can get it on the buses / Upstairs or down inside.**


D. H. Lawrence, 'Tickets Please', in England, My England and Other Stories, ed. Bruce Steele, (Cambridge University Press, 1990), pp. 34-45. All lines are quoted from this version of the text.

** Lyrics for the theme song to the film, On the Buses (dir. Harry Booth, 1971), were written by Roger Ferris. For those interested in hearing this charming ditty in full, please click here.

Posted by Stephen Alexander at 17:56